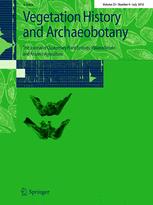 “A systematic review of archaeological and palaeoenvironmental records of cannabis (fibres, pollen, achenes and imprints of achenes) reveals its complex history in Eurasia. A multiregional origin of human use of the plant is proposed, considering the more or less contemporaneous appearance of cannabis records in two distal parts (Europe and East Asia) of the continent. A marked increase in cannabis achene records from East Asia between ca. 5,000 and 4,000 cal bpmight be associated with the establishment of a trans-Eurasian exchange/migration network through the steppe zone, influenced by the more intensive exploitation of cannabis achenes popular in Eastern Europe pastoralist communities. The role of the Hexi Corridor region as a hub for an East Asian spread of domesticated plants, animals and cultural elements originally from Southwest Asia and Europe is highlighted. More systematic, interdisciplinary and well-dated data, especially from South Russia and Central Asia, are necessary to address the unresolved issues in understanding the complex history of human cannabis utilisation.”

“The Tantalizing Clues That Suggest Cannabis Played a Key Role in the Birth of Civilization Itself” http://theinfluence.org/the-tantalizing-clues-that-suggest-cannabis-played-a-key-role-in-the-birth-of-civilization-itself/

“Stoned age: Humans were getting high on cannabis 10,000 years ago and experts say they also used the drug for food and clothes

“Man’s Stoned Age: cannabis use began 10,000 years ago. After the Ice Age came the Stoned Age. Early humans began using cannabis as long as 10,000 years ago, just as Europe’s glaciers had started their final retreat, scientists have found. An archaeological study suggests early humans in Europe and Asia stumbled on the plant at roughly the same time. The discovery was valued, suggest the scientists, not just for its psychoactive properties but also because its nutritious seeds could quench hunger pangs and hemp fibres could be woven into clothing.”                         http://www.thetimes.co.uk/article/mans-stoned-age-cwvtj2js2