“Neurological disorders such as neurodegenerative diseases or traumatic brain injury are associated with cognitive, motor and behavioural changes that influence the quality of life of the patients. Although different therapeutic strategies have been developed and tried until now to decrease the neurological decline, no treatment has been found to cure these pathologies.

In the last decades, the implication of the endocannabinoid system in the neurological function has been extensively studied, and the cannabinoids have been tried as a new promising potential treatment. In this study, we aimed to overview the recent available literature regarding in vivo potential of natural and synthetic cannabinoids with underlying mechanisms of action for protecting against cognitive decline and motor impairments.

In neurodegenerative diseases, the cannabinoids showed beneficial effects in decreasing the motor disability and disease progression by a complex mechanism targeting more signalling pathways further than classical receptors of the endocannabinoid system. In light of these results, the use of cannabinoids could be beneficial in traumatic brain injuries and multiple sclerosis treatment, especially in those patients who display resistance to conventional treatment.” 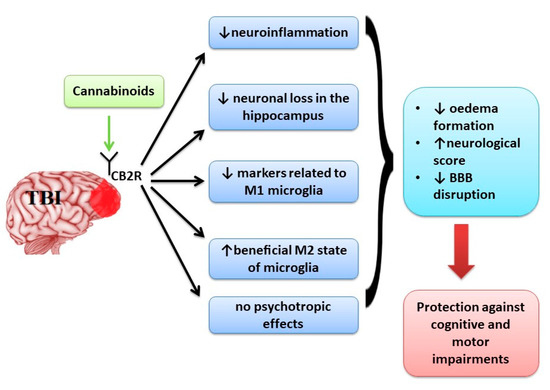