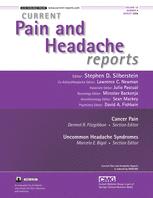 “Marijuana has been used both medicinally and recreationally since ancient times and interest in its compounds for pain relief has increased in recent years. The identification of our own intrinsic, endocannabinoid system has laid the foundation for further research.

Synthetic cannabinoids are being developed and synthesized from the marijuana plant such as dronabinol and nabilone. The US Food and Drug Administration approved the use of dronabinol and nabilone for chemotherapy-associated nausea and vomiting and HIV (Human Immunodeficiency Virus) wasting. Nabiximols is a cannabis extract that is approved for the treatment of spasticity and intractable pain in Canada and the UK. Further clinical trials are studying the effect of marijuana extracts for seizure disorders.

Phytocannabinoids have been identified as key compounds involved in analgesia and anti-inflammatory effects.  Other compounds found in cannabis such as flavonoids and terpenes are also being investigated as to their individual or synergistic effects.

This article will review relevant literature regarding medical use of marijuana and cannabinoid pharmaceuticals with an emphasis on pain and headaches.”