“Cholesterol plays vital roles in many central physiological and pathological processes. As a key component in the cell membrane, cholesterol can regulate a variety of ion channels, including ligand-gated ion channels (LGICs). However, relatively little is known about the molecular detail and in vivo consequence of cholesterol-LGIC interaction. Here, we reveal that membrane cholesterol depletion significantly inhibits the potentiating effects of dehydroxylcannabidiol (DH-CBD) on glycine-activated currents (IGly) in HEK 293T cells expressing α1/α3 glycine receptors (GlyRs). Simvastatin considerably decreases cholesterol levels and DH-CBD-induced potentiation of IGly in the spinal cord of mice. Simvastatin also significantly decreases DH-CBD analgesia in acute and chronic pain of mice. The cholesterol levels in the dorsal horn of spinal cord, measured by mass spectrometry imaging, are specifically correlated with cannabinoid potentiation of spinal GlyRs and cannabinoid-induced analgesia. These findings suggest that spinal cholesterol is critical for the efficacy of glycinergic cannabinoid-induced analgesia.”

“Opioid receptor agonist drugs, such as morphine, are very effective for treating chronic and severe pain; but, tolerance can develop with long-term use. Although there is a lot of information about the pathophysiological mechanisms of opioid tolerance, it is still not fully clarified. Suggested mechanisms for opioid tolerance include opioid receptor desensitisation, reduction of sensitivity G-proteins, activation of mitogen-activated protein kinase (MAPK), altered intracellular signaling pathway including nitric oxide, and activation of mammalian target of rapamycin (mTOR).

One way to reduce opioid tolerance and increase the analgesic potential is to use low doses. Combination of cannabinoids with opioids has been shown to manifest reduce the opioid dose. Experimental studies revealed an interaction of the endocannabinoid system and opioid antinociception.

Cannabinoid and opioid receptor systems use common pathways in the formation of analgesic effect and demonstrate their activity via G protein coupled receptors (GPCR). Cannabinoid drugs modulate opioid analgesic activity at a number of distinct levels within the cell, ranging from direct receptor associations, to post-receptor interactions through shared signal transduction pathways.

This review summarizes the data indicating that with combining cannabinoids and opioids drugs may be able to produce long-term analgesic effects, while preventing the opioid analgesic tolerance.”

“There has been an explosion of interest in the utility of cannabinoids as potential analgesics.

Our systematic review protocol is pre-registered on PROSPERO (CRD42018117367). An electronic search was made in PsycINFO, Cochrane, Google Scholar, Embase, and Pubmed of all literature published until August 2018. Of the 1,217 studies found from the search, a total 39 placebo-controlled studies that met the eligibility criteria were synthesized for the present study. Due to substantial heterogeneity of study designs, populations, cannabinoid compounds, and quantitative sensory testing outcomes, meta-analysis was not conducted.

“Understanding how the body regulates pain is fundamental to develop rational strategies to combat the growing prevalence of chronic pain states, opioid dependency, and the increased financial burden to the medical care system.

Pain is the most prominent reason why Americans seek medical attention and extensive literature has identified the importance of the endocannabinoid pathway in controlling pain. Modulation of the endocannabinoid system offers new therapeutic opportunities for the selective control of excessive neuronal activity in several pain conditions (acute, inflammatory, chronic, and neuropathic).

Cannabinoids have a long history of medicinal use and their analgesic properties are well documented; however, there are major impediments to understanding cannabinoid pain modulation.

One major issue is the presence of psychotropic side effects associated with D9-tetrahydrocannabinol (THC) or synthetic derivatives, which puts an emphatic brake on their use. This dose-limiting effect prevents the appropriate degree of analgesia .

Animal studies have shown that the psychotropic effects are mediated via brain cannabinoid type 1 (CB1) receptors, while analgesic activity in chronic pain states may be mediated via CB1R action in the spinal cord, brainstem, peripheral sensory neurons, or immune cells.

The development of appropriate therapies is incumbent on our understanding of the role of peripheral versus central endocannabinoid-driven analgesia. Recent physiological, pharmacological, and anatomical studies provide evidence that one of the main roles of the endocannabinoid system is the regulation of gamma-aminobutyric acid (GABA) and/or glutamate release.

This article will review this evidence in the context of its implications for pain. We first provide a brief overview of CB1R’s role in the regulation of nociception, followed by a review of the evidence that the peripheral endocannabinoid system modulates nociception.

We then look in detail at regulation of central-mediated analgesia, followed up with evidence that cannabinoid mediated modulation of pain involves modulation of GABAergic and glutamatergic neurotransmission in key brain regions. Finally, we discuss cannabinoid action on non-neuronal cells in the context of inflammation and direct modulation of neurons.

This work stands to reveal long-standing controversies in the cannabinoid analgesia area that have had an impact on failed clinical trials and implementation of therapeutics targeting this system.” 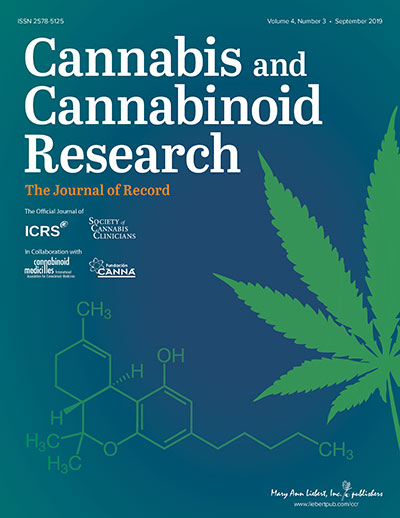 “Cannabis sativa has been used for centuries in treating pain. However, the analgesic role of many of its constituents including terpenes is unknown. This research examined the contributions of terpenes (volatile oil) and cannabinoids in cannabis-mediated analgesia in rats.

Methods: Animals received intraperitoneal administration of either vehicle, 10.0 or 18.0 mg/kg morphine, or various doses of the extract without terpenes, isolated terpenes, Δ9-tetrahydrocannabinol (THC), or the full extract. Thirty minutes later animals were tested on hotplate and tail-flick tests of thermal nociception. One week later, rats received a second administration of test articles and were tested 30 min later in the abdominal writhing test of inflammatory nociception.

Results: In the thermal assays, hotplate and tail-flick latencies for morphine-treated rats were dose dependent and significantly higher than vehicle-treated animals. All the cannabinoid compounds except for the isolated terpenes produced dose-dependent increases in hotplate and tail-flick latencies. In the inflammatory nociceptive assay, animals treated with vehicle and isolated terpenes demonstrated increased abdominal writhing, whereas all the cannabinoid compounds significantly decreased abdominal writhing responses.

“The work herein demonstrates that cannabis extracts can not only produce robust analgesia without the terpene-containing volatile oils, but isolated THC appears to be all that is required to produce such effects.”

“It is thought that endogenous cannabinoids have a role in the analgesia induced by specific forms of stress.

We examined if the role of endogenous cannabinoids is also dependent upon the mode of nociception, and whether this could be altered by drugs which block their enzymatic degradation.

These findings indicate the role of endocannabinoids in stress-induced analgesia differs with the type of thermal pain behaviour. However, by inhibiting their breakdown, endocannabinoids can be recruited to substitute for endogenous opioid signalling when their activity is blocked, indicating a degree of redundancy between opioid and cannabinoid systems.

Together these data suggest targeting endocannabinoid breakdown could provide an alternative, or adjuvant to mainstream analgesics such as opioids.” “Nociceptive Transient Receptor Potential channels such as TRPV1 are targets for treating pain. Both antagonism and agonism of TRP channels can promote analgesia, through inactivation and chronic desensitization.

Since plant-derived mixtures of cannabinoids and the Cannabis component myrcene have been suggested as pain therapeutics, we screened terpenes found in Cannabis for activity at TRPV1.

These data establish TRPV1 as a target of Myrcene and suggest the therapeutic potential of analgesic formulations containing Myrcene.”

“Much of the opioid epidemic arose from abuse of prescription opioid drugs.

This study sought to determine if the combination of a cannabinoid with an opioid could produce additive or synergistic effects on pain, allowing reduction in the opioid dose needed for maximal analgesia.

The ability of a cannabinoid to produce an additive or synergistic effect on analgesia when combined with morphine varies with the pain assay and may be mediated by CB1 or CB2 receptors. These results hold the promise of using cannabinoids to reduce the dose of opioids for analgesia in certain pain conditions.”

“Growing nonmedical use of prescription opioids is a global problem, motivating research on ways to reduce use and combat addiction.

Medical cannabis (“medical marijuana”) legalization has been associated epidemiologically with reduced opioid harms and cannabinoids have been shown to modulate effects of opioids in animal models.

This study was conducted to determine if Δ9-tetrahydrocannabinol (THC) enhances the behavioral effects of oxycodone.

Together these data demonstrate additive effects of THC and oxycodone and suggest the potential use of THC to enhance therapeutic efficacy, and to reduce the abuse, of opioids.”

“The endogenous cannabinoid system is involved in the physiological inhibitory control of pain and is of particular interest for the development of therapeutic approaches for pain management.

The large-conductance calcium-activated potassium (BK) channels have been reported to participate in anticonvulsant and vasorelaxant effects of cannabinoids. We asked whether BK channels participate in cannabinoids-induced analgesia and firing-suppressing effects in primary afferents after nerve injury.

Here, using mice with chronic constriction injury(CCI)-induced neuropathic pain, antinociception action and firing-suppressing effect of HU210 were measured before and after BK channel blocker application. We found that local peripheral application of HU210 alleviated CCI-induced pain behavior and suppressed the heightened firing of injured fibers. Co-administration of IBTX with HU210 significantly reversed the analgesia and the firing-suppressing effect of HU210.

This result indicated that the peripheral analgesic effects of cannabinoids depends on activation of BK channels.”