The endocannabinoid system may have a role in the pathogenesis of IBD.

Our study supports the notion that cannabis use affects eCB “tone” in UC patients and may have beneficial effects on disease symptoms in UC patients.”

“In conclusion, our study suggests that cannabis use may affect eCBs tone in UC patients. This affect has a beneficial effect on UC symptoms.”

Objective: The purpose of this research was to discover whether activation of cannabinoid CB1 receptors in L6 skeletal muscle cells may promote IL-6 gene expression.

Conclusion: For the first time, a unique link between ACEA and IL-6 up-regulation has been established; IL-6 up-regulation generated by ACEA is mediated in skeletal muscle through cannabinoid CB1 receptor activation. As a result, cannabinoid CB1 receptors may be useful pharmaceutical targets in the treatment of inflammation and related disorders in skeletal muscle tissues.” 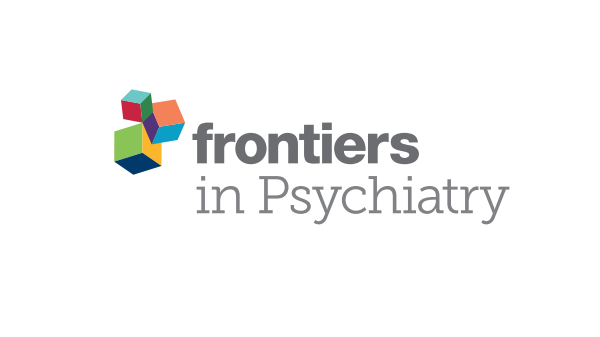 “Studies investigating the psychosomatic effects of social isolation in animals have shown that one of the physiologic system that gets disrupted by this environment-affective change is the Endocannabinoid System. As the levels of endocannabinoids change in limbic areas and prefrontal cortex during stressful times, so is the subject more prone to fearful and negative thoughts and aggressive behavior. The interplay of social isolation on the hypothalamic-pituitary-adrenal axis and cannabinoid tone triggers a vicious cycle which further impairs the natural body’s homeostatic neuroendocrine levels and provokes a series of risk factors for developing health complications. In this paper, we explore the psychosomatic impact of prolonged quarantine in healthy individuals, and propose management and coping strategies that may improve endocannabinoid tone, such as integration of probiotics, cannabidiol, meditation, and physical exercise interventions with the aim of supporting interpersonal, individual, and professional adherence with COVID-19 emergency public measures whilst minimizing their psycho-physical impact.”

“In humans, various sites like cannabinoid receptors (CBR) having a binding affinity with cannabinoids are distributed on the surface of different cell types, where endocannabinoids (ECs) and derivatives of fatty acid can bind. The binding of these substance(s) triggers the activation of specific receptors required for various physiological functions, including pain sensation, memory, and appetite.

The ECs and CBR perform multiple functions via the cannabinoid receptor 1 (CB1); cannabinoid receptor 2 (CB2), having a key effect in restraining neurotransmitters and the arrangement of cytokines. The role of cannabinoids in the immune system is illustrated because of their immunosuppressive characteristics. These characteristics include inhibition of leucocyte proliferation, T cells apoptosis, and induction of macrophages along with reduced pro-inflammatory cytokines secretion.

The review seeks to discuss the functional relationship between the endocannabinoid system (ECS) and anti-tumor characteristics of cannabinoids in various cancers.

The therapeutic potential of cannabinoids for cancer-both in vivo and in vitro clinical trials-has also been highlighted and reported to be effective in mice models in arthritis for the inflammation reduction, neuropathic pain, positive effect in multiple sclerosis and type-1 diabetes mellitus, and found beneficial for treating in various cancers.

In human models, such studies are limited; thereby, further research is indispensable in this field to get a conclusive outcome. Therefore, in autoimmune disorders, therapeutic cannabinoids can serve as promising immunosuppressive and anti-fibrotic agents.”

Cannabinoids are a group of compounds produced in the body (endocannabinoids) or found in cannabis (phytocannabinoids) that act through cannabinoid receptors and various other receptors expressed widely in the brain and immune system. In the last decade, cannabinoids have been well established experimentally to mediate anti-inflammatory properties. Research has shown that they suppress inflammation through multiple pathways, including apoptosis and inducing immunosuppressive T regulatory cells (Tregs) and myeloid-derived suppressor cells (MDSCs).

Interestingly, cannabinoids also mediate epigenetic alterations in genes that regulate inflammation. In the current review, we highlight how the epigenetic modulations caused by cannabinoids lead to the suppression of inflammation and help identify novel pathways that can be used to target autoimmune diseases.” 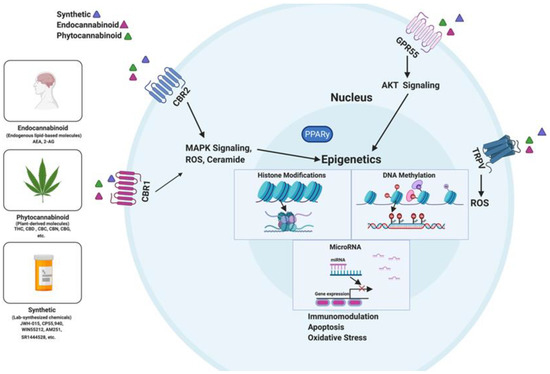 “Cannabis sativa L. is a source of over 150 active compounds known as phytocannabinoids that are receiving renewed interest due to their diverse pharmacologic activities. Indeed, phytocannabinoids mimic the endogenous bioactive endocannabinoids effects through activation of CB1 and CB2 receptors widely described in the central nervous system and peripheral tissues.

All phytocannabinoids have been studied for their protective actions towards different biological mechanisms, including inflammation, immune response, oxidative stress that, altogether, result in an inhibitory activity against the carcinogenesis.

The role of the endocannabinoid system is not yet completely clear in cancer, but several studies indicate that cannabinoid receptors and endogenous ligands are overexpressed in different tumor tissues.

Recently, in vitro and in vivo evidence support the effectiveness of phytocannabinoids against various cancer types, in terms of proliferation, metastasis, and angiogenesis, actions partially due to their ability to regulate signaling pathways critical for cell growth and survival.

The aim of this review was to report the current knowledge about the action of phytocannabinoids from Cannabis sativa L. against cancer initiation and progression with a specific regard to brain, breast, colorectal, and lung cancer as well as their possible use in the therapies. We will also report the known molecular mechanisms responsible for such positive effects.

Finally, we will describe the actual therapeutic options for Cannabis sativa L. and the ongoing clinical trials.”

“The therapeutic potential of Cannabis sativa has been recognized since ancient times. Phytocannabinoids, endocannabinoids and synthetic cannabinoids activate two major G protein-coupled receptors, subtype 1 and 2 (CB1 and CB2). Cannabinoids (CBs) modulate several aspects of cancer cells, such as apoptosis, autophagy, proliferation, migration, epithelial-to-mesenchymal transition and stemness. Moreover, agonists of CB1 and CB2 receptors inhibit angiogenesis and lymphangiogenesis in vitro and in vivo. Low-grade inflammation is a hallmark of cancer in the tumor microenvironment (TME), which contains a plethora of innate and adaptive immune cells. These cells play a central role in tumor initiation and growth and the formation of metastasis. CB2 and, to a lesser extent, CB1 receptors are expressed on a variety of immune cells present in TME (e.g., T cells, macrophages, mast cells, neutrophils, NK cells, dendritic cells, monocytes, eosinophils). The activation of CB receptors modulates a variety of biological effects on cells of the adaptive and innate immune system. The expression of CB2 and CB1 on different subsets of immune cells in TME and hence in tumor development is incompletely characterized. The recent characterization of the human cannabinoid receptor CB2-Gi signaling complex will likely aid to design potent and specific CB2/CB1 ligands with therapeutic potential in cancer.” 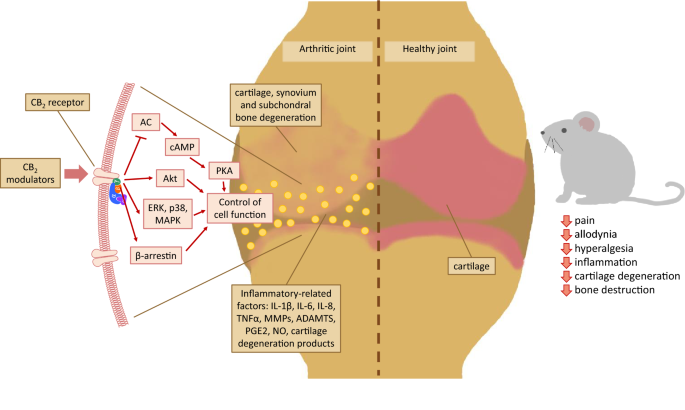 “Over the last several decades, the percentage of patients suffering from different forms of arthritis has increased due to the ageing population and the increasing risk of civilization diseases, e.g. obesity, which contributes to arthritis development. Osteoarthritis and rheumatoid arthritis are estimated to affect 50-60% of people over 65 years old and cause serious health and economic problems. Currently, therapeutic strategies are limited and focus mainly on pain attenuation and maintaining joint functionality. First-line therapies are nonsteroidal anti-inflammatory drugs; in more advanced stages, stronger analgesics, such as opioids, are required, and in the most severe cases, joint arthroplasty is the only option to ensure joint mobility.

Cannabinoids, both endocannabinoids and synthetic cannabinoid receptor (CB) agonists, are novel therapeutic options for the treatment of arthritis-associated pain. CB1 receptors are mainly located in the nervous system; thus, CB1 agonists induce many side effects, which limit their therapeutic efficacy. On the other hand, CB2 receptors are mainly located in the periphery on immune cells, and CB2 modulators exert analgesic and anti-inflammatory effects in vitro and in vivo. In the current review, novel research on the cannabinoid-mediated analgesic effect on arthritis is presented, with particular emphasis on the role of the CB2 receptor in arthritis-related pain and the suppression of inflammation.”

“Cannabinoids not only alleviate joint hyperalgesia but also may help to prevent joint damage, chronic pain development and disease progression.”

Results: Cannabinoids are described in three different forms, comprising endo- phyto- and synthetic compounds that exert biological effects. The molecular and cellular pathways of endogenous cannabinoids in the maintenance of homeostasis are well documented. In addition to classical cannabinoid receptors type 1 and 2, Vanilloid receptors and G protein-coupled receptor 55 were identified as common receptors. Subsequently, the effectiveness of phyto- and synthetic cannabinoids mediated by cannabinoid receptors has been demonstrated in the treatment of inflammatory diseases including neurodegenerative diseases as well as gastrointestinal and respiratory inflammations.