“The effect of Cannabis sativa on trypanosome-infected rats was examined. An aqueous extract of the seeds administered at a dose of 50 mg/kg/d cured animals infected with Trypanosome brucei brucei of blood stream parasites.

Six fractions eluted from the crude extract by column chromatography were assessed for trypanocidal properties. Of these, only 2 fractions retained trypanocidal activity by curing mice infected with T brucei brucei.” 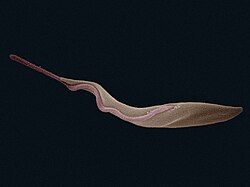 “Trypanosoma brucei is a species of parasitic kinetoplastid belonging to the genus Trypanosoma. The parasite is the cause of a vector-borne disease of vertebrate animals, including humans, carried by genera of tsetse fly in sub-Saharan Africa. In humans T. brucei causes African trypanosomiasis, or sleeping sickness.”  https://en.wikipedia.org/wiki/Trypanosoma_brucei

“A trypanocidal agent is an antiprotozoal agent that acts upon trypanosome parasites.”  https://en.wikipedia.org/wiki/Trypanocidal_agent

“Human tissues express cannabinoid CB(1) and CB(2) receptors that can be activated by endogenously released ‘endocannabinoids’ or exogenously administered compounds in a manner that reduces the symptoms or opposes the underlying causes of several disorders in need of effective therapy. Three medicines that activate cannabinoid CB(1)/CB(2) receptors are now in the clinic: Cesamet (nabilone), Marinol (dronabinol; Δ(9)-tetrahydrocannabinol (Δ(9)-THC)) and Sativex (Δ(9)-THC with cannabidiol). These can be prescribed for the amelioration of chemotherapy-induced nausea and vomiting (Cesamet and Marinol), stimulation of appetite (Marinol) and symptomatic relief of cancer pain and/or management of neuropathic pain and spasticity in adults with multiple sclerosis (Sativex). This review mentions several possible additional therapeutic targets for cannabinoid receptor agonists. These include other kinds of pain, epilepsy, anxiety, depression, Parkinson’s and Huntington’s diseases, amyotrophic lateral sclerosis, stroke, cancer, drug dependence, glaucoma, autoimmune uveitis, osteoporosis, sepsis, and hepatic, renal, intestinal and cardiovascular disorders. It also describes potential strategies for improving the efficacy and/or benefit-to-risk ratio of these agonists in the clinic. These are strategies that involve (i) targeting cannabinoid receptors located outside the blood-brain barrier, (ii) targeting cannabinoid receptors expressed by a particular tissue, (iii) targeting upregulated cannabinoid receptors, (iv) selectively targeting cannabinoid CB(2) receptors, and/or (v) adjunctive ‘multi-targeting’.”  https://www.ncbi.nlm.nih.gov/pubmed/23108552

“HISTORY OF THERAPEUTIC USE

The first formal report of cannabis as a medicine appeared in China nearly 5000 years ago when it was recommended for malaria, constipation, rheumatic pains and childbirth and, mixed with wine, as a surgical analgesic. There are subsequent records of its use throughout Asia, the Middle East, Southern Africa and South America. Accounts by Pliny, Dioscorides and Galen remained influential in European medicine for 16 centuries.”

“It was not until the 19th century that cannabis became a mainstream medicine in Britain. W. B. O’Shaughnessy, an Irish scientist and physician, observed its use in India as an analgesic, anticonvulsant, anti-spasmodic, anti-emetic and hypnotic. After toxicity experiments on goats and dogs, he gave it to patients and was impressed with its muscle-relaxant, anticonvulsant and analgesic properties, and recorded its use-fulness as an anti-emetic.”

“After these observations were published in 1842, medicinal use of cannabis expanded rapidly. It soon became available ‘over the counter’ in pharmacies and by 1854 it had found its way into the United States Dispensatory. The American market became flooded with dozens of cannabis-containing home remedies.”

“Cannabis was outlawed in 1928 by ratification of the 1925 Geneva Convention on the manufacture, sale and movement of dangerous drugs. Prescription remained possible until final prohibition under the 1971 Misuse of Drugs Act, against the advice of the Advisory Committee on Drug Dependence.”

“In the USA, medical use was effectively ruled out by the Marijuana Tax Act 1937. This ruling has been under almost constant legal challenge and many special dispensations were made between 1976 and 1992 for individuals to receive ‘compassionate reefers’. Although this loophole has been closed, a 1996 California state law permits cultivation or consumption of cannabis for medical purposes, if a doctor provides a written endorsement. Similar arrangements apply in Italy and Canberra, Australia.”

“Cannabinoids produce a plethora of biological effects, including the modulation of neuronal activity through the activation of CB(1) receptors and of immune responses through the activation of CB(2) receptors. The selective targeting of either of these two receptor subtypes has clear therapeutic value. Recent evidence indicates that some of the cannabinomimetic effects previously thought to be produced through CB(1) and/or CB(2) receptors, be they on neuronal activity, on the vasculature tone or immune responses, still persist despite the pharmacological blockade or genetic ablation of CB(1) and/or CB(2) receptors. This suggests that additional cannabinoid and cannabinoid-like receptors exist. Here we will review this evidence in the context of their therapeutic value and discuss their true belonging to the endocannabinoid signaling system.”  http://www.ncbi.nlm.nih.gov/pubmed/19248809