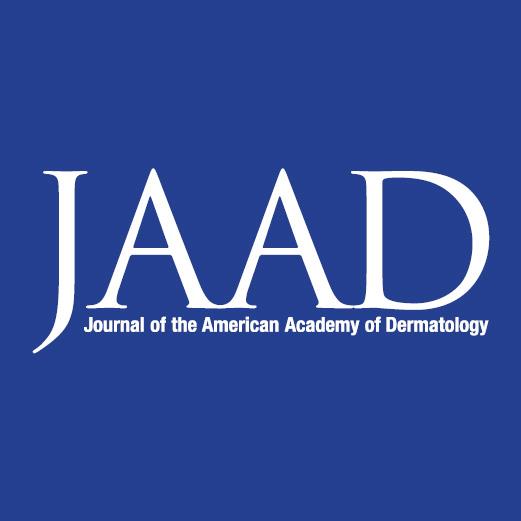 “Cannabidiol (CBD) is one of the most popular emerging plant extracts that is being investigated for its wide range of potential health benefits.

The results of this experiment demonstrate that CBD significantly inhibited melanoma cell growth in-vitro at 0.2 mg/mL and 0.04 mg/mL.

This shows that CBD has the potential to inhibit melanoma cell growth in vertebrates, namely mice.”

“Derivatives of the plant Cannabis sativa have been used for centuries for both medical and recreational purposes, as well as industrial. The first proof of its medicinal use comes from ancient China, although there is evidence of its earlier utilization in Europe and Asia. In the 19th century, European practitioners started to employ cannabis extracts to treat tetanus, convulsions, and mental diseases and, in 1851, cannabis made its appearance in the Pharmacopoeia of the United States as an analgesic, hypnotic and anticonvulsant. It was only in 1937 that the Marijuana Tax Act prohibited the use of this drug in the USA. The general term Cannabis is commonly used by the scientific and scholar community to indicate derivatives of the plant Cannabis sativa. The word cannabinoid is a term describing chemical compounds that are either derivate of Cannabis (phytocannabinoids) or artificial analogues (synthetic) or are produced endogenously by the body (endocannabinoids). A more casual term “marijuana” or “weed”, a compound derived from dried Cannabis flower tops and leaves, has progressively superseded the term cannabis when referred to its recreational use. The 2018 World health organisation (WHO) data suggest that nearly 2.5% of the global population (147 million) uses marijuana and some countries, such as Canada and Uruguay, have already legalised it. Due to its controversial history, the medicinal use of cannabinoids has always been a centre of debate. The isolation and characterisation of Δ9 tetrahydrocannabinol (THC), the major psychoactive component of cannabis and the detection of two human cannabinoid receptor (CBRs) molecules renewed interest in the medical use of cannabinoids, boosting research and commercial heed in this sector. Some cannabinoid-based drugs have been approved as medications, mainly as antiemetic, antianorexic, anti-seizure remedies and in cancer and multiple sclerosis patients’ palliative care. Nevertheless, due to the stigma commonly associated with these compounds, cannabinoids’ potential in the treatment of conditions such as cancer is still largely unknown and therefore underestimated.”

“Objective: The opioid epidemic continues to claim thousands of lives every year without an effective strategy useful in mitigating mortality. The use of medical cannabis has been proposed as a potential strategy to decrease opioid usage. The objective of this study was to determine how the use of medical cannabis affects prescribed opioid usage in chronic pain patients.

Conclusions: Patients in this study reported that cannabis was a useful adjunct and substitute for prescription opioids in treating their chronic pain and had the added benefit of improving the ability to function and quality of life.”

“Our results show a remarkable percentage of patients both reporting complete cessation of opioids and decreasing opioid usage by the addition of medical cannabis, with results lasting for over a year for the majority. Additional benefits of medical cannabis included improved ability to function and improved quality of life, especially for the younger age group. We believe our results lend further support that medical cannabis provided in a standardized protocol can lead to decreased pain and opioid usage, improved function, and quality of life measures, and even complete cessation of opioids in patients with chronic pain treated by opioids.”

“This study aims to add evidence regarding the impact marijuana use has on the prevalence of cardiovascular disease.

Our study lends support to the notion that marijuana use does not have an association with cardiovascular disease.

Although previous literature has shown that marijuana use has a negative impact on cardiovascular health, our study suggests that users and non-users of marijuana did not have an association with the prevalence of cardiovascular disease.”

“Background: The ongoing opioid overdose crisis is driven largely by exposure to illicitly-manufactured fentanyl. Preliminary observational and experimental research suggests that cannabis could potentially play a role in reducing use of prescription opioids among individuals with chronic pain. However, there is limited data on the effects of cannabis on illicit opioid consumption, particularly fentanyl, especially among individuals on opioid agonist therapy (OAT). We sought to assess the longitudinal association between cannabis use and exposure to fentanyl among people on OAT.

Results: Among the 819 participants on OAT who contributed 1989 observations over the study period, fentanyl exposure was common. At the baseline interview, fentanyl was detected in a majority of participants (431, 53 %), with lower prevalence among individuals with urine drug tests positive for tetrahydrocannabinol (47 vs. 56 %, p = 0.028). Over all study interviews, cannabis use was independently associated with reduced likelihood of being recently exposed to fentanyl (Adjusted Prevalence Ratio = 0.91, 95 % Confidence Interval: 0.83 – 0.99).

Conclusions: Participants on OAT using cannabis had significantly lower risk of being exposed to fentanyl. Our findings reinforce the need for experimental trials to investigate the potential benefits and risks of controlled cannabinoid administration for people on OAT.”

“Opioid agonist therapies (OAT) are the primary treatments for opioid use disorder. Exposure to fentanyl is driving mortality risk in the overdose crisis. Among 819 participants on OAT, cannabis was negatively associated with fentanyl. Experimental trials are needed to evaluate cannabis use during OAT.”

“Recently, there has been a growing interest in the medical applications of Cannabis plants. They owe their unique properties to a group of secondary metabolites known as phytocannabinoids, which are specific for this genus. Phytocannabinoids, and cannabinoids generally, can interact with cannabinoid receptors being part of the endocannabinoid system present in animals. Over the years a growing body of scientific evidence has been gathered, suggesting that these compounds have therapeutic potential.

In this article, we review the classification of cannabinoids, the molecular mechanisms of their interaction with animal cells as well as their potential application in the treatment of human diseases. Specifically, we focus on the research concerning the anticancer potential of cannabinoids in preclinical studies, their possible use in cancer treatment and palliative medicine, as well as their influence on the immune system. We also discuss their potential as therapeutic agents in infectious, autoimmune, and gastrointestinal inflammatory diseases.

We postulate that the currently ongoing and future clinical trials should be accompanied by research focused on the cellular and molecular response to cannabinoids and Cannabis extracts, which will ultimately allow us to fully understand the mechanism, potency, and safety profile of cannabinoids as single agents and as complementary drugs.”

“Additionally, much evidence from pre-clinical and clinical studies has been gathered over the last decade, suggesting that multiple substances produced by Cannabis plants have a therapeutic potential, including anticancer properties.”

“Gynaecological cancers can be primary neoplasms, originating either from the reproductive tract or the products of conception, or secondary neoplasms, representative of metastatic disease. For some of these cancers, the exact causes are unknown; however, it is recognised that the precise aetiopathogeneses for most are multifactorial and include exogenous (such as diet) and endogenous factors (such as genetic predisposition), which mutually interact in a complex manner.

One factor that has been recognised to be involved in the pathogenesis and progression of gynaecological cancers is the endocannabinoid system (ECS). The ECS consists of endocannabinoids (bioactive lipids), their receptors, and metabolic enzymes responsible for their synthesis and degradation. In this review, the impact of plant-derived (Cannabis species) cannabinoids and endocannabinoids on gynaecological cancers will be discussed within the context of the complexity of the proteins that bind, transport, and metabolise these compounds in reproductive and other tissues. In particular, the potential of endocannabinoids, their receptors, and metabolic enzymes as biomarkers of specific cancers, such as those of the endometrium, will be addressed. Additionally, the therapeutic potential of targeting selected elements of the ECS as new action points for the development of innovative drugs will be presented.”

“Cancers of the female reproductive system are common and are responsible for a large number of deaths in women. The exact reasons why some of these cancers occur are unknown. It is, however, known that for most of these cancers, several factors interact for them to happen. These interactions involve factors external and internal to the woman. An understanding of some of the internal factors involved in how these cancers arise will not only help drive preventive strategies, but will speed the development of new treatment approaches.

The endocannabinoid system is a family including chemicals (known as endocannabinoids) produced in the body that are similar to those derived from the cannabis plant. This system, which is widely distributed in the body, has been shown to be involved in various functions. Its disruption has been shown to lead to various diseases, one of which is cancer. In this review, we summarise current knowledge of this system, its various constituents, and how they are involved in reproductive events and their pathologies, especially cancers. Furthermore, we discuss the role of the endocannabinoid system in these cancers and how targeting it could lead to new approaches to diagnosis and treatment of cancers of the female reproductive system.” 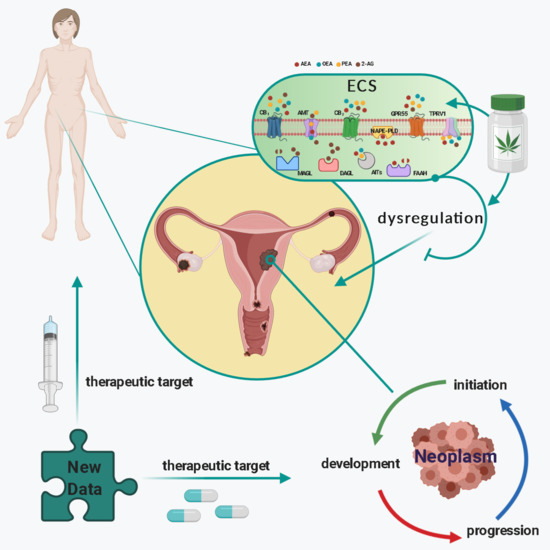