Conclusions. Both MMLs and dispensaries were associated with reductions in traffic fatalities, especially among those aged 25 to 44 years. State-specific analysis showed heterogeneity of the MML–traffic fatalities association, suggesting moderation by other local factors. These findings could influence policy decisions on the enactment or repealing of MMLs and how they are implemented.”

“Extravirgin olive oil (EVOO) represents the typical lipid source of the Mediterranean diet, an eating habit pattern that has been associated with a significant reduction of cancer risk. Diet is the more studied environmental factor in epigenetics, and many evidences suggest dysregulation of epigenetic pathways in cancer.

The aim of our study was to investigate the effects of EVOO and its phenolic compounds on endocannabinoid system (ECS) gene expression via epigenetic regulation in both human colon cancer cells (Caco-2) and rats exposed to short- and long-term dietary EVOO.

Taken together, our findings demonstrating CB₁ gene expression modulation by EVOO or its phenolic compounds via epigenetic mechanism, both in vitro and in vivo, may provide a new therapeutic avenue for treatment and/or prevention of colon cancer.”

“Cannabinoid– 2 (CB2) receptor is known for its anti-obesity effects silencing the activated immune cells that are key drivers of metabolic syndrome and inflammation.

Nutritional interventions in experimental models of carcinogenesis have been demonstrated to modulate tissue inflammation state and proliferation.

OBJECTIVE: Aim of this study was to test, in ApcMin/+ mice, whether a diet enriched with olive oil, omega- 3 and omega-6- PUFAs affects the adipose tissue inflammation status.

RESULTS: The diet enriched with olive oil significantly induced CB2 receptor expression and it was able to control inflammatory and proliferative activity of mice adipose tissue.

“The endocannabinoid system serves many physiological roles, including in the regulation of energy balance, food reward, and voluntary locomotion.

Signaling at the cannabinoid type 1 receptor has been specifically implicated in motivation for rodent voluntary exercise on wheels.

We studied four replicate lines of high runner (HR) mice that have been selectively bred for 81 generations based on average number of wheel revolutions on days five and six of a six-day period of wheel access.

“Glaucoma represents several optic neuropathies leading to irreversible blindness through progressive retinal ganglion cell (RGC) loss. Reduction of intraocular pressure (IOP) is known as the only modifiable factor in the treatment of this disorder.

Application of exogenous cannabinoids to lower IOP has attracted attention of scientists as potential agents for the treatment of glaucoma.

Accordingly, neuroprotective effect of these agents has been recently described through modulation of endocannabinoid system in the eye.

In addition to experimental studies, bioavailability of cannabinoids, clinical surveys, and adverse effects of application of cannabinoids in glaucoma will be reviewed.”

“Age-related osteoblast dysfunction is the main cause of age-related bone loss.

Trans-caryophyllene (TC) is an important constituent of the essential oils derived from several species of medicinal plants.

In this study, we investigated the effects of TC on osteoblast function in osteoblastic MC3T3-E1 cells. The results indicate that TC caused a significant elevation in collagen content, alkaline phosphatase activity, osteocalcin production, and mineralization, which are the four markers that account for the various stages of osteoblastic differentiation.

Our findings that TC promotes the formation of a mineralized extracellular matrix help to elucidate the role of CB2 signaling in the formation of bone and the maintenance of normal bone mass.”

“Trans-caryophyllene is a sesquiterpene present in many medicinal plants’ essential oils, such as Ocimum gratissimum and Cannabis sativa.”  https://www.ncbi.nlm.nih.gov/pubmed/24055516

“Mesenchymal stem cells (MSCs) have emerged as a promising tool for the treatment of several neurodegenerative disorders, including Alzheimer’s disease (AD). The main neuropathological hallmarks of AD are senile plaques, composed of amyloid beta (Aβ), and neurofibrillary tangles, formed by hyperphosphorylated tau. However, current therapies for AD have shown limited efficacy.

In this study, we evaluated whether pre-treatment with cannabidiol (CBD), at 5 μM concentration, modulated the transcriptional profile of MSCs derived from gingiva (GMSCs) in order to improve their therapeutic potential, by performing a transcriptomic analysis by the next-generation sequencing (NGS) platform.

By comparing the expression profiles between GMSCs treated with CBD (CBD-GMSCs) and control GMSCs (CTR-GMSCs), we found that CBD led to the downregulation of genes linked to AD, including genes coding for the kinases responsible of tau phosphorylation and for the secretases involved in Aβ generation. In parallel, immunocytochemistry analysis has shown that CBD inhibited the expression of GSK3β, a central player in AD pathogenesis, by promoting PI3K/Akt signalling.

In order to understand through which receptor CBD exerted these effects, we have performed pre-treatments with receptor antagonists for the cannabinoid receptors (SR141716A and AM630) or for the vanilloid receptor 1 (TRPVI). Here, we have proved that TRPV1 was able to mediate the modulatory effect of CBD on the PI3K/Akt/GSK3β axis.

In conclusion, we have found that pre-treatment with CBD prevented the expression of proteins potentially involved in tau phosphorylation and Aβ production in GMSCs. Therefore, we suggested that GMSCs preconditioned with CBD possess a molecular profile that might be more beneficial for the treatment of AD.” 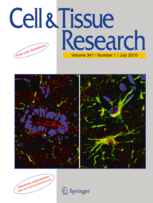 “Endocannabinoids (ECs) are ubiquitous endogenous lipid derivatives and play an important role in intercellular communication either in an autocrine/paracrine or in an endocrine fashion. Recently, an intrinsic EC system has been discovered in the hypophysial pars tuberalis (PT) of hamsters and humans. In hamsters, this EC system is under photoperiodic control and appears to influence the secretion of hormones such as prolactin from the adenohypophysis. We investigate the EC system in the PT of the rat, a frequently used species in endocrine research.

By means of immunocytochemistry, enzymes involved in EC biosynthesis, e.g., N-arachidonoyl-phosphatidylethanolamine-phospholipase D (NAPE-PLD) and diacylglycerol lipase α (DAGLα) and enzymes involved in EC degradation, e.g., fatty acid amide hydrolase (FAAH) and cyclooxygenase-2 (COX-2), were demonstrated in PT cells of the rat. Immunoreactions (IR) for FAAH and for the cannabinoid receptor CB1 were observed in corticotrope cells of the rat adenohypophysis; these cells were identified by antibodies against proopiomelanocortin (POMC) or adrenocorticotrophic hormone (ACTH). In the outer zone of the median eminence, numerous nerve fibers and terminals displayed CB1 IR. The majority of these were also immunolabeled by an antibody against corticotropin-releasing factor (CRF).

These results suggest that the EC system at the hypothalamo-hypophysial interface affects both the CRF-containing nerve fibers and the corticotrope cells in the adenohypophysis. Our data give rise to the hypothesis that, in addition to its well-known role in the reproductive axis, the PT might influence adrenal functions and, thus, the stress response and immune system.”

“The misuse of prescription opiates is on the rise with combination therapies (e.g. acetaminophen or NSAIDs) resulting in severe liver and kidney damage. In recent years, cannabinoid receptors have been identified as potential modulators of pain and rewarding behaviors associated with cocaine, nicotine and ethanol in preclinical models. Yet, few studies have identified whether mu opioid agonists and CB2 agonists act synergistically to inhibit chronic pain while reducing unwanted side effects including reward liability.

We determined if analgesic synergy exists between the mu-opioid agonist morphine and the selective CB2 agonist, JWH015, in rodent models of acute and chronic inflammatory, post-operative, and neuropathic pain using isobolographic analysis. We also investigated if the MOR-CB2 agonist combination decreased morphine-induced conditioned place preference (CPP) and slowing of gastrointestinal transit. Co-administration of morphine with JWH015 synergistically inhibited preclinical inflammatory, post-operative and neuropathic-pain in a dose- and time-dependent manner; no synergy was observed for nociceptive pain. Opioid-induced side effects of impaired gastrointestinal transit and CPP were significantly reduced in the presence of JWH015.

Here we show that MOR + CB2 agonism results in a significant synergistic inhibition of preclinical pain while significantly reducing opioid-induced unwanted side effects.

“These results suggest a defective endocannabinoid system-mediated immunomodulation in patients with schizophrenia.”