“Hemp seeds have a plethora of nutrients necessary to the healing process which makes them one of the most nutritious foods on our planet. When we talk about hemp seeds we mean hulled seeds from the hemp plant. Although in the same genus of plants as Marijuana, Hemp does not possess high enough levels of the medicinal and analgesic (pain relieving) compound Tetrahydrocannabinol, also commonly known by its acronym THC, to be considered the same plant. This article is about the healing medicinal value of hulled hemp seeds with respect to their content of essential amino acids (raw protein) and highly unsaturated essential fatty acids…

The fat content and balance of essential fats in hemp seeds is superior to almost every other seed and nut. Hemp has a ratio of Omega-6 to Omega-3 of 3.75 to 1, which according to the World Health Organization is close to perfect for effective metabolism. Hemp also contains other very important co-factor nutrients including chlorophyll, Vitamin E, a complex of B Vitamins including Folic Acid, as well as Phosphorous, Calcium, Magnesium and Potassium…”

“There are currently two camps on curing cancer with cannabis: the hot process created by Canadian Rick Simpson some 13 years ago, and juicing raw leaves advocated by Dr. William Courtney of California. Both have had undeniable success in curing cancer and keeping serious illness at bay with the plant, heated or not…

Remove stems. Rinse, soak, and rinse leaves again. (I soak overnight if leaves have been sprayed.)

Add one heaping handful of leaves to blender.

Add one cup of juice or water.

Strain into a container using a sieve.

Store juice in glass jars. Juice will keep for a few days in the fridge.

Freeze in ice cube trays or plastic containers, wrap in plastic and store in freezer for several weeks.”

“Cannabis is one of the oldest known medicinal plants, and a large variety of biological activities have been described. The main constituents, the cannabinoids, are thought to be most important for these activities. Although smoking of cannabis is by far the most common way of consumption, a significant part of medicinal users consume it in the form of a tea.

However, not much is known about the composition of cannabis tea, or the effect of different parameters during preparation, handling or storage. In this study we used the high-grade cannabis available in Dutch pharmacies to study the cannabinoid composition of tea under standardized and quantitative conditions. Experimental conditions were systematically varied in order to mimic the possible variations made by medicinal users.

The results obtained in this study provide a clear quantitative insight in the phytochemistry of cannabis tea preparation and can contribute to a better appreciation of this mode of cannabis administration.”

“TruthOnPot.com – Medical marijuana seems to be a gift from nature for anyone who suffers from pain, which is a symptom that most patients with arthritis are all-too-familiar with. Interestingly, the earliest evidence of medical marijuana’s use as a treatment for arthritis dates as far back as 2800 BC, which makes it more of a historical finding than a scientific breakthrough.

Today, more than 31 million Americans suffer from arthritis. And while the Arthritis Foundation lists over 100 different medications that are available for this disease, many patients continue to suffer from painful and often debilitating symptoms without adequate relief.

For those patients, medical marijuana seems to provide hope.”

“Contrary to popular belief, the marijuana plant is a whole lot more than just a psychoactive drug that “stoners” use to get high.

In raw form, marijuana leaves and buds are actually loaded with a non-psychoactive, antioxidant, anti-inflammatory, and anti-cancer nutrient compound known as cannabidiol (CBD) that is proving to be a miracle “superfood” capable of preventing and reversing a host of chronic illnesses…

“There’s a tendency to discount claims when something appears to be good for everything, but there’s a reason this is the case. The endogenous cannabinoid system acts as a modulator in fine-tuning a lot of these systems, and if something is deranged biochemically in a person’s body, it may well be that a cannabinoid system can bring things back into balance.””

Doctor of Oriental and Pastoral Medicine

“Dr. Sean McAllister and Pierre Desprez claim they’ve successfully used cannabidiol to fight animal genes involved in the spread of cancer. “We found this one compound had a specific effect on metastatic cancer cells, very aggressive tumor cells,” McAllister says. Cannabidiol, the research appears to show, helps shut down receptors that inhibit cancerous cells from metastasizing.  “We find when you treat with cannabidiol, you down regulate the expression of this protein, and that inhibits the disease process.” Unlike THC, the ingredient in marijuana that makes you feel stoned, cannabidiol is a non-toxic compound of the plant that has no psychoactive qualities.

I already published that marijuana is the best medicine for 3-year-old Cash Hyde of Missoula, Montana. The boy’s parent’s defied doctor’s orders—and Montana law—to get their hands on the medicinal treatment their son needed after he was diagnosed with recurring brain tumors at 22 months old. “I’ve had law enforcement threatening to kick my door down, but I would have done anything to keep Cashy alive,” said Mike Hyde, who has long been a proponent of the drug, told ABCNews.com.

My book on Medical Marijuana goes into the research from around the globe, including from Harvard University that sustains the conclusions of doctors McAllister and Desprez.

Dixie Botanicals is shipping Cannabidiol from Denver Colorado to all fifty states though of course one can grow marijuana oneself and or use regular marijuana strains if one lives in one of the now fifteen states that has made medical marijuana legal.

I take great exception to the Obama administration that has continued to resist the legalization on a federal level of medical marijuana. They still insist that there is no medical use for marijuana when all the science proves the government to be dead wrong. They hunt the world for terrorists but some of the worst live and work right in Washington DC. Terrorists are people who hurt others and I do not see the difference between those who use guns and those who use drugs or deny the population the natural substances they need to be well.

Of course marijuana is extremely effective for other diseases. The most recent I have read about: Medical pot treats boy’s epilepsy, without getting him high. The little boy has been swallowing droppers full of a solution made mostly of cannabidiol, or CBD, the second most prominent of marijuana’s 100 or so cannabinoids. Unlike the dominant THC, cannabidiol is not psychoactive, so the sweet-tasting infusion Jayden takes four times a day doesn’t make him high.

Down from 22 prescription pills per day to four, he now eats solid food, responds to his father’s incessant requests for kisses and dances in his Modesto living room to the “Yo Gabba Gabba!” theme song. The frequency and intensity of his seizures have been greatly reduced.

CBD was virtually bred out of U.S. plants decades ago by growers whose customers preferred the mind-altering properties of high-THC varietals. Yet it is experiencing a resurgence, having shown promise as an anti-inflammatory, anticonvulsant, neuroprotectant and cancer-fighting agent.

Studies have shown THC is “overwhelmingly anticonvulsant” in animals, said Dr. Ben Whalley, a researcher at Britain’s University of Reading, but CBD and some other non-psychoactive cannabinoids have shown similar effects without the mind-altering downside.”

“For decades, Colombia has been searching for ways to treat people who are addicted to basuco, the nation’s version of crack cocaine. Now, the country’s capital, Bogota, is considering a new approach: transition users to marijuana.

BBC Mundo reports that the city is interested in trying a pilot program to see if pot helps mitigate the symptoms of withdrawal that basuco users experience. The goal is to minimize the social and health risks that accompany the drug.

Basuco isn’t the same as crack, but it’s an apt comparison. Like crack, it’s smokable and more common among a poorer segment of society.

When it comes to quality, basuco is some of the least pure cocaine out there. The base of the drug is an intermediary product that you get if you’re turning coca leaves into cocaine, and it can contain residue from the solvents used in that process, including kerosene. Dealers add things like ash and crushed bricks to give it bulk. For less than a dollar, you can get a short but powerful high.” 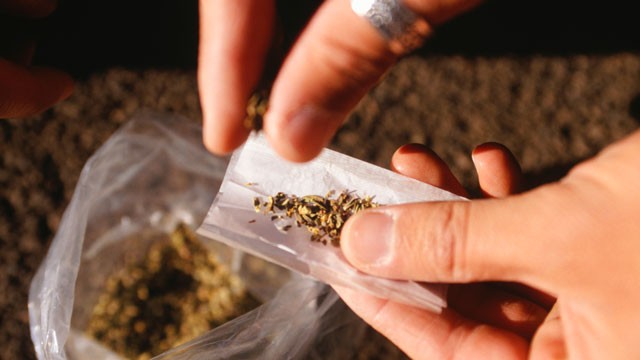 Doug Menuez/Getty Images
“The mayor’s office in Bogota is considering a pilot program that would look to transition drug addicts from hard drugs to marijuana.”

“One expert in Bogota estimates that the city has at least 7,000 “problem users,” which means they might take up to 15-20 hits a day, according to BBC Mundo.

To confront the issue, the city is planning to test out “controlled consumption centers,” where addicts of hard drugs will be able to consume in a safer environment, with the goal of kicking the habit.

Julián Quintero, from the Bogota-based non-profit organization Acción Técnica Social, which works on drug policy, told BBC Mundo how such centers will work:

“The first thing you do is to start to reduce the dose. After that, you begin to change the way that it’s administered: if you were injecting heroin, you move to smoking heroin; after smoking heroin, you move to combining it with cannabis; after that, you’re staying with the cannabis,” he said. “What you’re looking for is for the person to reach a point where they can stabilize the consumption and that the consumption doesn’t prevent them from being functional.”

Is anyone in the U.S. trying this kind of approach to hard drugs?

No, according to Amanda Reiman, a policy manager with the Drug Policy Alliance, a group that favors alternatives to current drug laws.

“Unfortunately, universities rely on grants from the federal government for research, so most of what they do is what the feds want done,” she said in an email. “As you can probably guess, the feds are not too interested in beneficial uses for marijuana, and even less interested in how to help people who are addicted to substances, so most of the research in this area occurs outside the U.S. or through private funding.””