In this in vitro study we tried to reveal the anticancer properties of CBD in malignant melanoma cell lines (SK-MEL 28, A375, FM55P and FM55M2) administered alone, as well as in combination with mitoxantrone (MTX) or cisplatin (CDDP).

The effects of CBD on the viability of melanoma cells were measured by the MTT assay; cytotoxicity was determined in the LDH test and proliferation in the BrdU test. Moreover, the safety of CBD was tested in human keratinocytes (HaCaT) in LDH and MTT tests.

Results indicate that CBD reduces the viability and proliferation of melanoma-malignant cells and exerts additive interactions with MTX. Unfortunately, CBD produced antagonistic interaction when combined with CDDP. CBD does not cause significant cytotoxicity in HaCaT cell line.

In conclusion, CBD may be considered as a part of melanoma multi-drug therapy when combined with MTX. A special attention should be paid to the combination of CBD with CDDP due to the antagonistic interaction observed in the studied malignant melanoma cell lines.”

Oncology patients reported on multiple symptoms before and after MC treatment initiation at one-, three-, and 6-month follow-ups. Oncologists reported on the patients’ disease characteristics. Intention-to-treat models were used to assess changes in outcomes from baseline. MC treatment was initiated by 324 patients and 212, 158 and 126 reported at follow-ups.

The results of this study suggest that MC treatment is generally safe for oncology patients and can potentially reduce the burden of associated symptoms with no serious MC-related adverse effects.

The main finding of the current study is that most cancer comorbid symptoms improved significantly during 6 months of MC treatment.

Additionally, we found that MC treatment in cancer patients was well tolerated and safe.”

“Despite the long history of cannabinoid use for medicinal and ritual purposes, an endogenous system of cannabinoid-controlled receptors, as well as their ligands and the enzymes that synthesise and degrade them, was only discovered in the 1990s. Since then, the endocannabinoid system has attracted widespread scientific interest regarding new pharmacological targets in cancer treatment among other reasons. Meanwhile, extensive preclinical studies have shown that cannabinoids have an inhibitory effect on tumour cell proliferation, tumour invasion, metastasis, angiogenesis, chemoresistance and epithelial-mesenchymal transition (EMT) and induce tumour cell apoptosis and autophagy as well as immune response. Appropriate cannabinoid compounds could moreover be useful for cancer patients as potential combination partners with other chemotherapeutic agents to increase their efficacy while reducing unwanted side effects. In addition to the direct activation of cannabinoid receptors through the exogenous application of corresponding agonists, another strategy is to activate these receptors by increasing the endocannabinoid levels at the corresponding pathological hotspots. Indeed, a number of studies accordingly showed an inhibitory effect of blockers of the endocannabinoid-degrading enzymes fatty acid amide hydrolase (FAAH) and monoacylglycerol lipase (MAGL) on tumour development and spread. This review summarises the relevant preclinical studies with FAAH and MAGL inhibitors compared to studies with cannabinoids and provides an overview of the regulation of the endocannabinoid system in cancer.”

“Drugs targeting the endocannabinoid system are of interest as potential systemic chemotherapeutic treatments and for palliative care in cancer. In this context, cannabinoid compounds have been successfully tested as a systemic therapeutic option in preclinical models over the past decades. Recent findings have suggested an essential function of the endocannabinoid system in the homeostasis of various skin functions and indicated that cannabinoids could also be considered for the treatment and prophylaxis of tumour diseases of the skin. Cannabinoids have been shown to exert their anticarcinogenic effects at different levels of skin cancer progression, such as inhibition of tumour growth, proliferation, invasion and angiogenesis, as well as inducing apoptosis and autophagy. This review provides an insight into the current literature on cannabinoid compounds as potential pharmaceuticals for the treatment of melanoma and squamous cell carcinoma.”

“Substantial preclinical evidence demonstrates the antiproliferative, cytotoxic, and antimetastatic properties of plant-derived cannabinoids (phytocannabinoids) such as cannabidiol and tetrahydrocannabinol. The cumulative body of research into the intracellular mechanisms and phenotypic effects of these compounds supports a logical, judicious progression to large-scale phase II/III clinical trials in certain cancer types to truly assess the efficacy of phytocannabinoids as anticancer agents.”

“Drugs that target the endocannabinoid system are of interest as pharmacological options to combat cancer and to improve the life quality of cancer patients. From this perspective, cannabinoid compounds have been successfully tested as a systemic therapeutic option in a number of preclinical models over the past decades. As a result of these efforts, a large body of data suggests that the anticancer effects of cannabinoids are exerted at multiple levels of tumour progression via different signal transduction mechanisms. Accordingly, there is considerable evidence for cannabinoid-mediated inhibition of tumour cell proliferation, tumour invasion and metastasis, angiogenesis and chemoresistance, as well as induction of apoptosis and autophagy. Further studies showed that cannabinoids could be potential combination partners for established chemotherapeutic agents or other therapeutic interventions in cancer treatment. Research in recent years has yielded several compounds that exert promising effects on tumour cells and tissues in addition to the psychoactive Δ9-tetrahydrocannabinol, such as the non-psychoactive phytocannabinoid cannabidiol and inhibitors of endocannabinoid degradation. This review provides an up-to-date overview of the potential of cannabinoids as inhibitors of tumour growth and spread as demonstrated in preclinical studies.”

“Preclinical models provided ample evidence that cannabinoids are cytotoxic against cancer cells. Among the best studied phytocannabinoids, cannabidiol (CBD) is most promising for the treatment of cancer as it lacks the psychotomimetic properties of delta-9-tetrahydrocannabinol (THC). In vitro studies and animal experiments point to a concentration- (dose-)dependent anticancer effect. The effectiveness of pure compounds versus extracts is the subject of an ongoing debate. Actual results demonstrate that CBD-rich hemp extracts must be distinguished from THC-rich cannabis preparations. Whereas pure CBD was superior to CBD-rich extracts in most in vitro experiments, the opposite was observed for pure THC and THC-rich extracts, although exceptions were noted. The cytotoxic effects of CBD, THC and extracts seem to depend not only on the nature of cannabinoids and the presence of other phytochemicals but also largely on the nature of cell lines and test conditions. Neither CBD nor THC are universally efficacious in reducing cancer cell viability. The combination of pure cannabinoids may have advantages over single agents, although the optimal ratio seems to depend on the nature of cancer cells; the existence of a ‘one size fits all’ ratio is very unlikely. As cannabinoids interfere with the endocannabinoid system (ECS), a better understanding of the circadian rhythmicity of the ECS, particularly endocannabinoids and receptors, as well as of the rhythmicity of biological processes related to the growth of cancer cells, could enhance the efficacy of a therapy with cannabinoids by optimization of the timing of the administration, as has already been reported for some of the canonical chemotherapeutics. Theoretically, a CBD dose administered at noon could increase the peak of anandamide and therefore the effects triggered by this agent. Despite the abundance of preclinical articles published over the last 2 decades, well-designed controlled clinical trials on CBD in cancer are still missing. The number of observations in cancer patients, paired with the anticancer activity repeatedly reported in preclinical in vitro and in vivo studies warrants serious scientific exploration moving forward.”

“Various preclinical and clinical studies exhibited the potential of cannabis against various diseases, including cancer and related pain. Subsequently, many efforts have been made to establish and develop cannabis-related products and make them available as prescription products. Moreover, FDA has already approved some cannabis-related products, and more advancement in this aspect is still going on. However, the approved product of cannabis is in oral dosage form, which exerts various limitations to achieve maximum therapeutic effects. A considerable translation is on a hike to improve bioavailability, and ultimately, the therapeutic efficacy of cannabis by the employment of nanotechnology. Besides the well-known psychotropic effects of cannabis upon the use at high doses, literature has also shown the importance of cannabis and its constituents in minimising the lethality of cancer in the preclinical models. This review discusses the history of cannabis, its legal aspect, safety profile, the mechanism by which cannabis combats with cancer, and the advancement of clinical therapy by exploiting nanotechnology. A brief discussion related to the role of cannabinoid in various cancers has also been incorporated. Lastly, the information regarding completed and ongoing trials have also been elaborated.”

“Melanoma is one of the most aggressive malignances in human. Recently developed therapies improved overall survival rate, however, the treatment of melanoma still remains a challenging issue.

This review attempts to summarize recent advances in studies on cannabinoids used in the setting of melanoma treatment.

Cannabinoids should be rather considered as a part of multi-targeted anti-tumor therapy instead of being standalone agent. Moreover, cannabinoids are likely to improve quality of life in patients with cancer, due to different supportive effects, like analgesia and/or anti-emetic effects.

In this review, it was pointed out that cannabinoids may be potentially useful in the melanoma therapy. Nevertheless, due to limited amount of data, great variety of cannabinoids available and lack of clinical trials, further studies are required to determine an exact role of cannabinoids in the treatment of melanoma.”

“The endocannabinoid system is dysregulated in numerous pathological conditions, including malignancies. Recently, cannabinoids have received increasing amount of interest in the setting of treatment of various cancers.  Cannabinoids seem to be promising agents in the setting of melanoma treatment. In the case of melanoma, most important actions of cannabinoids described so far are decrease of cells viability by increase of apoptosis, necrosis and cell cycle arrest. Moreover, cannabinoids slow down disease progress by reduction of metastasis and tumor vascularization. Due to large variety of cannabinoids, there are many potential derivatives, which may be found useful in the therapy of melanoma.” 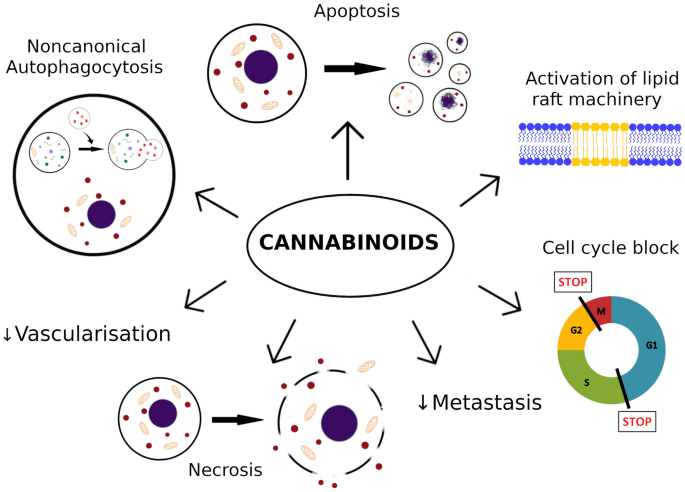 “Agents targeting the endocannabinoid system (ECS) have gained attention as potential cancer treatments. Given recent evidence that cannabinoid receptor 2 (CB2R) regulates lymphocyte development and inflammation, we performed studies on CB2R in the immune response against melanoma. Analysis of The Cancer Genome Atlas (TCGA) data revealed a strong positive correlation between CB2R expression and survival, as well as B cell infiltration in human melanoma. In a murine melanoma model, CB2R expression reduced the growth of melanoma as well as the B cell frequencies in the tumor microenvironment (TME), compared to CB2R-deficient mice. In depth analysis of tumor-infiltrating B cells using single-cell RNA sequencing suggested a less differentiated phenotype in tumors from Cb2r-/- mice. Thus, in this study, we demonstrate for the first time a protective, B cell-mediated role of CB2R in melanoma. This gained insight might assist in the development of novel, CB2R-targeted cancer therapies.”

“In this study we investigated the role of cannabinoid receptor 2 (CB2R) on immune cells in melanoma and found significantly improved overall survival in patients with high intra-tumoral CB2R gene expression. In human melanoma, CB2R is predominantly expressed in B cells, as shown using a previously published single-cell RNA sequencing (scRNA-seq) dataset and by performing RNAscope. In a murine melanoma model, tumor growth was enhanced in CB2R-deficient mice. In-depth analysis of tumor-infiltrating lymphocytes using scRNA-seq showed less differentiated B cells in CB2R-deficient tumors, favoring the induction of regulatory T cells (Treg) and an immunosuppressive tumor microenvironment. Taken together, these data indicate a central role of CB2R on B cells in regulating tumor immunity. These results contribute to the understanding of the role of CB2R in tumor immunity and facilitate the development of new CB2R-targeted anti-cancer drugs.”