“There is concern that recreational marijuana legalization (RML) may lead to increased cannabis use disorder (CUD) among youth due to increased marijuana use.

This study investigates whether adolescent substance use disorder treatment admissions for marijuana use increased in Colorado and Washington following RML.

Over all states in the analysis, the rate of adolescent treatment admissions for marijuana use declined significantly over the study period (β=-3.375, 95 % CI=-4.842, -1.907), with the mean rate falling nearly in half. The decline in admissions rate was greater in Colorado and Washington compared to non-RML states following RML, though this difference was not significant (β=-7.671, 95 % CI=-38.798, 23.456).

“Youth treatment admissions in Colorado and Washington did not increase after RML. Admissions for 2008–2017 declined in both Colorado/Washington and non-RML states.” 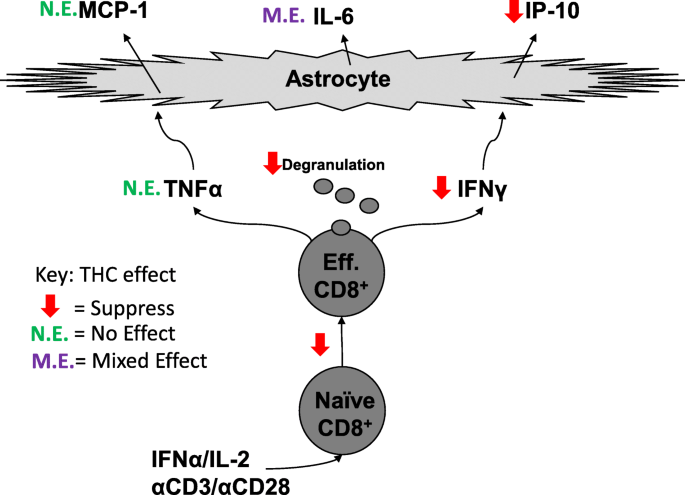 “CD8+ T cells can contribute to neuroinflammation by secretion of inflammatory cytokines like interferon γ (IFNγ) and tumor necrosis factor α (TNFα). Astrocytes, a glial cell in the brain, can be stimulated by IFNγ and TNFα to secrete the inflammatory cytokines, monocyte chemotactic protein 1 (MCP-1), interleukin 6 (IL-6), and interferon-γ inducible protein 10 (IP-10).

The objective of this investigation was to assess the effects of THC treatment on CD8+ T cell-mediated activation of astrocytes.

“Cannabinoids are reported to rescue cocaine-induced seizures (CISs), a severe complication in cocaine users. However, the molecular targets for cannabinoid therapy of CISs remain unclear.

Here, we report that the systemic administration of cannabinoids alleviates CISs in a CB1/CB2-receptor-independent manner.

These findings suggest that using GlyR-hypersensitive cannabinoids may represent a potential therapeutic strategy for treating CISs.”

Cannabinoid receptors are expressed in gut immune cells and in epithelial cells of inflamed guts.

Using ex vivo and in vitro human models, we demonstrated that manipulating the cannabinoid system affects colon cells and secretome characteristics that facilitate MH in IBD.”

Besides Δ9-tetrahydrocannabinol that is the principal psychoactive constituent of Cannabis, cannabidiol (CBD) is the most abundant nonpsychoactive phytocannabinoid and may represent a prototype for anti-inflammatory drug development for human pathologies where both the inflammation and oxidative stress (OS) play an important role to their etiology and progression.

In this context, CBD, which interacts with the eCB system, but has also cannabinoid receptor-independent mechanism, might be a good candidate as a prototype for anti-oxidant drug development for the major neurodegenerative disorders, such as PD and AD. This review summarizes the multiple molecular pathways that underlie the positive effects of CBD, which may have a considerable impact on the progression of the major neurodegenerative disorders.”

“The present review provided evidence that the nonpsychoactive phytocannabinoids CBD could be a potential pharmacological tool for the treatment of neurodegenerative disorders; its excellent safety and tolerability profile in clinical studies renders it a promising therapeutic agent.

The molecular mechanisms associated with CBD’s improvement in PD and AD are likely multifaceted, and although CBD may act on different molecular targets all the beneficial effects are in some extent linked to its antioxidant and anti-inflammatory profile, as observed in in vitro and in vivo studies. Therefore, this review describes evidence to prove the therapeutical efficacy of CBD in patients affected by neurodegenerative disorders and promotes further research in order to better elucidate the molecular pathways involved in the therapeutic potential of CBD.”

“The synthetic atypical cannabinoid Abn-CBD, a cannabidiol (CBD) derivative, has been recently shown to modulate the immune system in different organs, but its impact in obesity-related meta-inflammation remains unstudied.

We investigated the effects of Abn-CBD on metabolic and inflammatory parameters utilizing a diet-induced obese (DIO) mouse model of prediabetes and non-alcoholic fatty liver disease (NAFLD).

“In summary, we herein provide evidence that the atypical cannabinoid Abn-CBD is able to induce beneficial metabolic and anti-inflammatory actions at both systemic and tissue level in a mouse model of diet-induced prediabetes and NAFLD.”

“Recently, several studies have reported that the pharmacological effects exerted by cannabidiol (CBD) are partially related to the regulation of autophagy. Increasing evidence indicates that autophagy provides protection against ischemia-induced brain injury. However, the protective effect of CBD against mitochondrial-dependent apoptosis in hemorrhagic shock (HS)-induced brain injury has not been studied.

In the present study, we observed the protective effects of CBD against neural mitochondrial-dependent apoptosis in a rat model of HS. In addition, CBD increased Beclin-1 and LC3II expression and reduced P62 expression, which were indicative of autophagy. CBD treatment attenuated the neural apoptosis induced by HS, as reflected by restoring mitochondrial dysfunction, downregulation of BAX, neuro-apoptosis ratio and NF-κB signaling activation, and upregulation of BCL2 in the cerebral cortex.

Such protective effects were reversed by 3-Methyladenine, a specific autophagy inhibitor, indicating that the protective effects of CBD treatment involved autophagy. LY294002, a PI3K inhibitor, significantly inhibited CBD-induced autophagy, demonstrating that PI3K/AKT signaling is involved in the CBD’s regulation of autophagy. Furthermore, we found that CBD treatment upregulated PI3K/AKT signaling via cannabinoid receptor 1.

“Hemorrhagic shock occurs when the body begins to shut down due to large amounts of blood loss.” https://www.healthline.com/health/hemorrhagic-shock

“In the sports domain, cannabis is prohibited by the World Anti-Doping Agency (WADA) across all sports in competition since 2004. The few studies on physical exercise and cannabis focused on the main compound i.e. Δ9-tetrahydrocannabinol. Cannabidiol (CBD) is another well-known phytocannabinoid present in dried or heated preparations of cannabis. Unlike Δ9-tetrahydrocannabinol, CBD is non-intoxicating but exhibits pharmacological properties that are interesting for medical use.

The worldwide regulatory status of CBD is complex and this compound is still a controlled substance in many countries. Interestingly, however, the World Anti-Doping Agency removed CBD from the list of prohibited substances – in or out of competition – since 2018. This recent decision by the WADA leaves the door open for CBD use by athletes.

In the present opinion article we wish to expose the different CBD properties discovered in preclinical studies that could be further tested in the sport domain to ascertain its utility. Preclinical studies suggest that CBD could be useful to athletes due to its anti-inflammatory, analgesic, anxiolytic, neuroprotective properties and its influence on the sleep-wake cycle. Unfortunately, almost no clinical data are available on CBD in the context of exercise, which makes its use in this context still premature.”

“Athletes could benefit from CBD to manage pain, inflammation and the swelling processes associated with injury. CBD could be useful to manage anxiety, fear memory process, sleep and sleepiness in athletes. CBD could be interesting for the management of mild traumatic brain injury and chronic traumatic encephalopathy.”

“The oil from industrial hemp seeds (Cannabis sativa) is an ideal source of stearidonic acid, which is a precursor fatty acid for the long-chained n-3 polyunsaturated fatty acids. These fatty acids are important for neonatal development, health and immunity.

Hemp seed oil has been investigated for the influence on human health, but research on the impact in pig nutrition is scarce. The aim of our research was to study the effect of dietary hemp seed oil relative to soybean oil to lactating sows on the transfer of fatty acids to the off-spring and the effect on piglets’ immune and nutritional status.

The hemp seed oil resulted in direct maternal supply with n-3 long-chain polyunsaturated fatty acids (LCPUFA), especially ALA and SDA, and piglets were able to convert these fatty acids obtained via the sow milk intake to C20:5n-3 and C22:5n-3. Furthermore, some interesting effects of the 5% hemp seed oil was obtained with regard to piglet initial body weight gain and glucose, which could be of interest for further research, i.e., the capability of hemp seed oil to benefit piglets during early life.”

“Our research demonstrated that colostrum and milk fatty acid composition and immunoglobulin concentration, as well as fatty acid profile of sows’ and piglets’ plasma, were influenced by the fatty acid composition of the maternal diets provided during late gestation and lactation. The hemp seed oil resulted in direct maternal supply with n-3 LCPUFAs, especially ALA and SDA, and piglets were able to convert these fatty acids obtained via the sow milk intake to C20:5n-3 and C22:5n-3.”