“Several studies support, both in vitro and in vivo, the anti-cancer effects of cannabidiol (CBD), a transient receptor potential vanilloid 2 (TRPV2) ligand. TRPV2, often dysregulated in tumors, is associated with altered cell proliferation and aggressiveness.

Endometrial cancer (EC) is historically divided in type I endometrioid EC and type II non-endometrioid EC, associated with poor prognosis. Treatment options with chemotherapy and combinations with radiation showed only limited efficacy. Since no data are reported concerning TRPV2 expression as well as CBD potential effects in EC, the aim of this study was to evaluate the expression of TRPV2 in biopsies and cell lines as well as the effects of CBD in in vitro models. Overall survival (OS), progression-free survival (PFS), cell viability, migration, and chemo-resistance have been evaluated.

Results show that TRPV2 expression increased with the malignancy of the cancer tissue and correlated with shorter PFS (p = 0.0224). Moreover, in vitro TRPV2 over-expression in Ishikawa cell line increased migratory ability and response to cisplatin. CBD reduced cell viability, activating predominantly apoptosis in type I cells and autophagy in mixed type EC cells. The CBD improved chemotherapeutic drugs cytotoxic effects, enhanced by TRPV2 over-expression. Hence, TRPV2 could be considered as a marker for optimizing the therapy and CBD might be a useful therapeutic option as adjuvant therapy.” 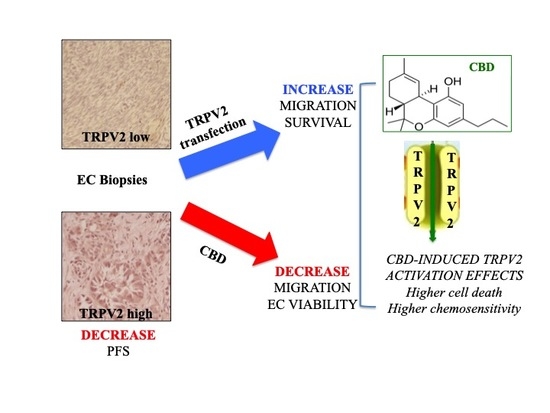 We show that CBD interacts with TRPV2 through a hydrophobic pocket located between S5 and S6 helices of adjacent subunits, which differs from known ligand and lipid binding sites in other TRP channels. CBD-bound TRPV2 structures revealed that the S4-S5 linker plays a critical role in channel gating upon CBD binding. Additionally, nanodiscs permitted us to visualize two distinct TRPV2 apo states in a lipid environment.

Together these results provide a foundation to further understand TRPV channel gating, their divergent physiological functions, and to accelerate structure-based drug design.”

“Multiple myeloma (MM) is a plasma cell (PC) malignancy characterised by the accumulation of a monoclonal PC population in the bone marrow (BM).

Cannabidiol (CBD) is a non-psychoactive cannabinoid with antitumoural activities, and the transient receptor potential vanilloid type-2 (TRPV2) channel has been reported as a potential CBD receptor.

However, no functional role has been ascribed to CBD and TRPV2 in MM. In this study, we identified the presence of heterogeneous CD138+TRPV2+ and CD138+TRPV2- PC populations in MM patients, whereas only the CD138+ TRPV2- population was present in RPMI8226 and U266 MM cell lines.

Because bortezomib (BORT) is commonly used in MM treatment, we investigated the effects of CBD and BORT in CD138+TRPV2- MM cells and in MM cell lines transfected with TRPV2 (CD138+TRPV2+).

These results showed that CBD by itself or in synergy with BORT strongly inhibited growth, arrested cell cycle progression and induced MM cells death by regulating the ERK, AKT and NF-κB pathways with major effects in TRPV2+ cells.

These data provide a rationale for using CBD to increase the activity of proteasome inhibitors in MM.”