“Several neuropharmacological actions of cannabidiol (CBD) due to the modulation of the endocannabinoid system as well as direct serotonergic and gamma-aminobutyric acidergic actions have recently been identified.

Adult male Wistar rats (n = 24) were exposed to various stressors on a daily basis in order to induce anhedonia and anxiety-like behaviors. CBD (10 mg/kg body weight) was administered by daily intraperitoneal injections for 28 days (n = 12). The effects of the treatment were assessed on body weight, sucrose preference, and exploratory and anxiety-related behavior in the open field (OF) and elevated plus maze (EPM) tests. Hair corticosterone was also assayed by liquid chromatography-mass spectrometry.

At the end of the experiment, CBD-treated rats showed a higher rate of body weight gain (5.94% vs. 0.67%) and sucrose preference compared to controls. A significant increase in vertical exploration and a trend of increase in distance traveled in the OF test were observed in the CBD-treated group compared to the vehicle-treated group. The EPM test did not reveal any differences between the groups. Hair corticosterone levels increased in the CBD-treated group, while they decreased in controls compared to baseline (+36.01% vs. -45.91%). In conclusion, CBD exerted a prohedonic effect in rats subjected to CUMS, demonstrated by the increased sucrose preference after three weeks of treatment.

“The prevalence rates of depression and anxiety are at least two times higher in diabetic patients, increasing morbidity and mortality.

Cannabidiol (CBD) has been identified as a therapeutic agent viable to treat diverse psychiatric disorders. Thus, this study aimed to investigate the effect of CBD treatment (once a day for 14 days starting two weeks after diabetes induction; at doses of 0, 3, 10 or 30 mg/kg, i.p.) on depression- and anxiety-like behaviors associated with experimental diabetes induced by streptozotocin (60 mg/kg; i.p.) in rats.

Levels of plasma insulin, blood glucose, and weight gain were evaluated in all experimental groups, including a positive control group treated with imipramine. The rats were tested in the modified forced swimming test (mFST) and elevated plus maze (EPM) test. Besides, the levels of serotonin (5-HT), noradrenaline (NA) and dopamine (DA) in two emotion-related brain regions, the prefrontal cortex (PFC) and hippocampus (HIP) were evaluated using high-pressure liquid chromatography.

Our results showed that CBD treatment (only at the higher dose of 30 mg/kg) reduced the exaggerated depressive- and anxiogenic-like behaviors of diabetic (DBT) rats, which may be associated with altered 5-HT, NA and/or DA levels observed in the PFC and HIP. Treatment with CBD (higher dose) also induced a significant increase in weight gain and the insulin levels (and consequently reduced glycemia) in DBT rats. The long-term CBD effects gave rise to novel therapeutic strategies to limit the physiological and neurobehavioral deficits in DBT rats.

This approach provided evidence that CBD can be useful for treating psychiatry comorbidities in diabetic patients.”

The molecular mechanisms underlying the antidepressant-like effects of CBD are not yet understood. Previous studies in differentiated skin cells demonstrated that CBD regulates DNA methylation, an overall repressive epigenetic mechanism. Both stress exposure and antidepressant treatment can modulate DNA methylation in the brain, and lead to gene expression changes associated with depression neurobiology.

We investigated herein if the antidepressant effect of CBD could be associated with changes in DNA methylation in the prefrontal cortex (PFC) and hippocampus (HPC) of mice submitted to the forced swimming test (FST).

Altogether, our results indicate that CBD regulates DNA methylation in brain regions relevant for depression neurobiology, suggesting that this mechanism could be related to CBD-induced antidepressant effects.”

“Cannabidiol is a non-psychoactive phytocannabinoid with great therapeutic potential in diverse psychiatric disorders; however, its antidepressant potential has been mainly ascertained in adult rats.

To compare the antidepressant-like response induced by cannabidiol in adolescent and adult rats and the possible parallel modulation of hippocampal neurogenesis.

Our findings support the notion that cannabidiol exerts antidepressant- and anorexigenic-like effects in adult rats and demonstrate a decreased potential when administered in adolescent rats. Moreover, since cannabidiol did not modulate hippocampal neurogenesis (cell proliferation and early neuronal survival) in adolescent or adult rats, the results revealed potential antidepressant-like effects induced by cannabidiol without the need of regulating hippocampal neurogenesis.”

“Chronic stress is depressogenic by altering neurotrophic and neuroinflammatory environments of the organism. The endocannabinoid system controls cognitive and emotional responses related with stress through the interaction with endocannabinoid receptors. β-Caryophyllene (BCP) is a CB2 agonist that exhibited anti-inflammatory, analgesic effects but minimal psychoactive effects. To test if BCP exhibits antidepressant-like action, animals were chronically restrained with additional stressors for 28 days, and BCP (25, 50, 100 mg/kg) was intraperitoneally injected once a day during the stress inflicting period. Then despair related behaviors and hippocampal expression of neurotrophic, inflammatory and cannabinoid receptor levels were measured. To test the effect of BCP on long-term depression, field potentials were measured during the application of lipopolysaccharide and low frequency stimulation. In the tail suspension test and forced swim test, chronic stress-induced despair behaviors were reduced by BCP. Also BCP improved the stress-related changes in the hippocampal expression of COX-2, BDNF, and CB2 receptor expression. In organotypic hippocampal slices, BCP reduced the lipopolysaccharide-induced intensification of the long-term depression. In conclusion, BCP improved chronic stress related behavioral and biochemical changes. These results suggest that BCP may be effective in treating depression and stress related mental illnesses.”

“Depression is a widespread psychological disorder that affects up to 20% of the world’s population. Traditional Chinese medicine (TCM), with its unique curative effect in depression treatment, is gaining increasing attention as the discovery of novel antidepressant drug has become the pursuit of pharmaceutical. This article summarizes the work done on the natural products from TCM that have been reported to conceive antidepressant effects in the past two decades, which can be classified according to various mechanisms including increasing synaptic concentrations of monoamines, alleviating the hypothalamic-pituitary-adrenal (HPA) axis dysfunctions, lightening the impairment of neuroplasticity, fighting towards immune and inflammatory dysregulation. The antidepressant active ingredients identified can be generally divided into saponins, flavonoids, alkaloids, polysaccharides and others. Albiflorin, Baicalein, Berberine chloride, beta-Asarone, cannabidiol, Curcumin, Daidzein, Echinocystic acid (EA), Emodin, Ferulic acid, Gastrodin, Genistein, Ginsenoside Rb1, Ginsenoside Rg1, Ginsenoside Rg3, Hederagenin, Hesperidin, Honokiol, Hyperoside, Icariin, Isoliquiritin, Kaempferol, Liquiritin, L-theanine, Magnolol, Paeoniflorin, Piperine, Proanthocyanidin, Puerarin, Quercetin, Resveratrol (trans), Rosmarinic acid, Saikosaponin A, Senegenin, Tetrahydroxystilbene glucoside and Vanillic acid are Specified in this review. Simultaneously, chemical structures of the active ingredients with antidepressant activities are listed and their sources, models, efficacy and mechanisms are described. Chinese compound prescription and extracts that exert antidepressant effects are also introduced, which may serve as a source of inspiration for further development. In the view of present study, the antidepressant effect of certain TCMs are affirmative and encouraging. However, there are a lot of work needs to be done to evaluate the exact therapeutic effects and mechanisms of those active ingredients, specifically, to establish a unified standard for diagnosis and evaluation of curative effect.” 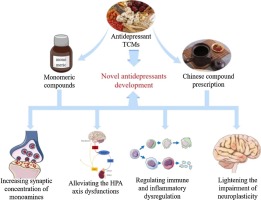 “Although a lot of information can be found on the specific dual role of the endocannabinoid system in the emotional-related responses, little is known whether stimulation or inhibition of the CB receptors may affect the activity of the frequently prescribed antidepressant drugs.

Summarizing, the results of the present study revealed that both activation and inhibition of the CB2 receptor function have a potential to strengthen the antidepressant activity of drugs targeting the monoaminergic system. Most probably, the described interaction has a pharmacodynamic background.”

“Interplay between CB2 receptor ligands and antidepressants is pharmacodynamic in nature.”

“Cannabidiol (CBD) exhibits significant efficacy in mental and inflammatory diseases. Several studies have recently reported on the rapid antidepressant-like effects of CBD, suggesting that CBD is a potential anti-depressant or anti-stress drug. However, CBD is mainly administered orally or by inhalation with poor bioavailability, resulting in high costs. We aim to explore the efficacy of long-term periodic administration of CBD in chronic mild stress (CMS) via two routes and its pharmacokinetics. We treated ICR mice with CBD administered orally and intravenously and then determined the kinetic constants. A single bolus intravenous injection of CBD resulted in a half-life of 3.9 h, mean residence time of 3.3 h, and oral bioavailability of about 8.6%. The antidepressant-like effects of periodically administered CBD on the chronic mild stress mouse model are evaluated. Results demonstrated that such treatment at a high dose of 100 mg/kg CBD (p.o.) or a low dose of 10 mg/kg CBD (i.v.), elicited significant antidepressant-like behavioral effects in forced swim test, following increased mRNA expression of brain-derived neurotrophic factor (BDNF) and synaptophysin in the prefrontal cortex and the hippocampus. Our findings are expected to provide a reference for the development of intravenous antidepressant formulations of CBD.”

“Long-term single housing increases aggressive behavior in mice, a condition named isolation-induced aggression or territorial aggression, which can be attenuated by anxiolytic, antidepressant, and antipsychotic drugs.

Preclinical and clinical findings indicate that cannabidiol (CBD), a non-psychotomimetic compound from Cannabis sativa, has anxiolytic, antidepressant, and antipsychotic properties. Few studies, however, have investigated the effects of CBD on aggressive behaviors.

Here, we investigated whether CBD (5, 15, 30, and 60 mg/kg; i.p.) could attenuate social isolation-induced aggressive behavior in the resident-intruder test.

Taken together, our findings suggest that CBD may be therapeutically useful to treat aggressive behaviors that are usually associated with psychiatric disorders.”