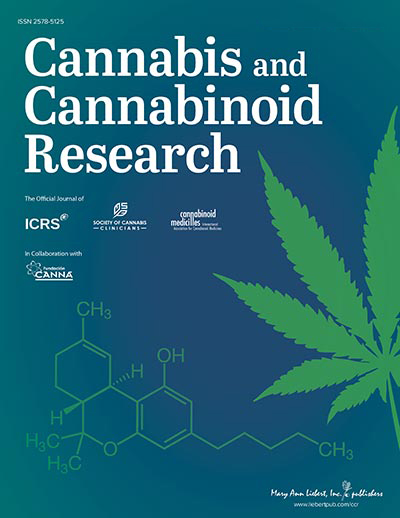 “Preclinical studies have shown cannabidiol is protective in models of ischemic stroke. Based on results from our recent systematic review, we investigated the effects of two promising neuroprotective phytocannabinoids, cannabigerol (CBG) and cannabidivarin (CBDV), on cells of the blood-brain barrier (BBB), namely human brain microvascular endothelial cells (HBMECs), pericytes, and astrocytes.

Conclusions: We show that CBG and CBDV were protective against OG mediated injury in three different cells that constitute the BBB, modulating different hallmarks of ischemic stroke pathophysiology. These data enhance our understanding of the protective effects of CBG and CBDV and warrant further investigation into these compounds in ischemic stroke. Future studies should identify other possible neuroprotective effects of CBG and CBDV and their corresponding mechanisms of action.”

“This study provides novel data on the neuroprotective and anti-inflammatory properties of CBG and CBDV in an in vitro model of IR. These data, together with evidence from other studies, corroborate the protective properties of these compounds and further studies are needed to elucidate the mechanism of action of CBG and CBDV and whether they can modulate BBB permeability in more clinically relevant in vivo models of ischemic stroke. There is lack of effective treatments for ischemic stroke, a condition that will increase in prevalence in coming years, to which cannabinoids may offer a unique therapeutic strategy.”

“These data support the notion that CBD and CBDV act as functional partial agonists on dopamine D2-like receptors in vivo.

The discovery that dopamine receptor is involved in the actions of phytocannabinoids moves a significant step toward our understanding of the mechanisms for medical uses of cannabis in the treatment of neurological and psychiatric disorders.”

“Rett syndrome (RTT) is a rare neurologic disorder, characterized by severe behavioural and physiological symptoms. RTT is caused by mutations in the MECP2 gene in about 95% of cases and to date no cure is available.

The present study evaluated the potential therapeutic efficacy for RTT of cannabidiolic acid (CBDA; 0.2, 2, 20 mg/kg through intraperitoneal injections for 14 days), a pCB that has proved to be effective for the treatment of nausea and anxiety in rodents.

This study demonstrates that systemic treatment with the low dose of CBDA has anti-nociceptive effects and reduces the thermal hyperalgesia in 8-month old MeCP2-308 male mice, a validated RTT mouse model. CBDA did not affect other behavioural or molecular parameters.

These results provide support to the antinociceptive effects of CBDA and stress the need for further studies aimed at clarifying the mechanisms underlying the abnormal pain perception in RTT.”

“Current antiepileptic drugs (AEDs) are undesirable for many reasons including the inability to reduce seizures in certain types of epilepsy, such as Dravet syndrome (DS) where in one-third of patients does not respond to current AEDs, and severe adverse effects that are frequently experienced by patients.

Epidiolex, a cannabidiol (CBD)-based drug, was recently approved for treatment of DS. While Epidiolex shows great promise in reducing seizures in patients with DS, it is used in conjunction with other AEDs and can cause liver toxicity. To investigate whether other cannabis-derived compounds could also reduce seizures, the antiepileptic effects of CBD, Δ9-tetrahydrocannabinol (THC), cannabidivarin (CBDV), cannabinol (CBN), and linalool (LN) were compared in both a chemically-induced (pentylenetetrazole, PTZ) and a DS (scn1Lab-/-) seizure models.

Cannabidiol (0.6 and 1 μM) and THC (1 and 4 μM) significantly reduced PTZ-induced total distance moved. At the highest THC concentration, the significant reduction in PTZ-induced behavior was likely the result of sedation as opposed to antiseizure activity.

In the DS model, CBD (0.6 μM), THC (1 μM), CBN (0.6 and 1 μM), and LN (4 μM) significantly reduced total distance traveled. Cannabinol was the most effective at reducing total distance relative to controls. In addition to CBD, other cannabis-derived compounds showed promise in reducing seizure-like activity in zebrafish.

Specifically, four of the five compounds were effective in the DS model, whereas in the PTZ model, only CBD and THC were, suggesting a divergence in the mode of action among the cannabis constituents.”

“In the DS model, CBD, THC, CBN, and LN caused significant reduction in seizure behavior, while THC and CBD were effective in both models.”

“Autism spectrum disorder (ASD) is a high cost neurodevelopmental condition; and there are currently no effective pharmacological treatments for its core symptoms. This has led some families and researchers to trial alternative remedies – including the non-intoxicating Cannabis sativa-derived compound cannabidivarin (CBDV). However, how CBDV affects the human brain is unknown.

Previous (pre)clinical evidence suggests that CBDV may modulate brain excitatory-inhibitory systems, which are implicated in ASD. Hence, our main aim was to test, for the first time, if CBDV shifts glutamate and/or GABA metabolites – markers of the brain’s primary excitatory and inhibitory system – in both the ‘typical’ and autistic brain.

Our subsidiary aim was to determine whether, within ASD, brain responsivity to CBDV challenge is related to baseline biological phenotype. We tested this using a repeated-measures, double-blind, randomized-order, cross-over design.

We used magnetic resonance spectroscopy (MRS) to compare glutamate (Glx = glutamate + glutamine) and GABA + (GABA + macromolecules) levels following placebo (baseline) and 600 mg CBDV in 34 healthy men with (n = 17) and without (n = 17) ASD. Data acquisition from regions previously reliably linked to ASD (dorsomedial prefrontal cortex, DMPFC; left basal ganglia, BG) commenced 2 h (peak plasma levels) after placebo/CBDV administration. Where CBDV significantly shifted metabolite levels, we examined the relationship of this change with baseline metabolite levels. Test sessions were at least 13 days apart to ensure CBDV wash-out. CBDV significantly increased Glx in the BG of both groups. However, this impact was not uniform across individuals. In the ASD group, and not in the typically developing controls, the ‘shift’ in Glx correlated negatively with baseline Glx concentration. In contrast, CBDV had no significant impact on Glx in the DMPFC, or on GABA+ in either voxel in either group.

Our findings suggest that, as measured by MRS, CBDV modulates the glutamate-GABA system in the BG but not in frontal regions. Moreover, there is individual variation in response depending on baseline biochemistry. Future studies should examine the effect of CBDV on behaviour and if the response to an acute dose of CBDV could predict a potential clinical treatment response in ASD.”

“Here we report that CBDV can ‘shift’ subcortical levels of the brain’s primary excitatory metabolite glutamate (measured as Glx) both in the neurotypical and autistic brain; but that there may be significant response variability in ASD. These findings add to our understanding of the effects of CBDV in the adult human brain. Nonetheless, future studies will need to explore (i) the mechanisms of action of CBDV; (ii) the impact of CBDV on (ASD-related) cognition and behaviour; (iii) if single-dose responsivity could facilitate the identification of pharmacologically homogeneous sub-groups; and (iv) if acute CBDV effects are indicative of the impact of long-term treatment in ASD.”

Cannabidivarin (CBDV) is a safe non-psychoactive phytocannabinoid able to activate TRPA1, a member of TRP channels superfamily, which plays a pivotal role in intestinal inflammation.

Here, we have investigated the potential intestinal anti-inflammatory effect of CBDV in mice and in biopsies from pediatric patients with active UC.

Our preclinical study shows that CBDV exerts intestinal anti-inflammatory effects in mice via TRPA1, and in children with active UC.

Since CBDV has a favorable safety profile in humans, it may be considered for possible clinical trials in patients with UC.”

“Autism spectrum disorder (ASD) is a developmental condition whose primary features include social communication and interaction impairments with restricted or repetitive motor movements. No approved treatment for the core symptoms is available and considerable research efforts aim at identifying effective therapeutic strategies.

Emerging evidence suggests that altered endocannabinoid signaling and immune dysfunction might contribute to ASD pathogenesis. In this scenario, phytocannabinoids could hold great pharmacological potential due to their combined capacities to act either directly or indirectly on components of the endocannabinoid system and to modulate immune functions.

Among all plant-cannabinoids, the phytocannabinoid cannabidivarin (CBDV) was recently shown to reduce motor impairments and cognitive deficits in animal models of Rett syndrome, a condition showing some degree of overlap with autism, raising the possibility that CBDV might have therapeutic potential in ASD.

As dysregulations in the endocannabinoid system and neuroinflammatory markers contribute to the development of some ASD phenotypes in the VPA model, neurochemical studies were performed after symptomatic treatment to investigate possible CBDV’s effects on the endocannabinoid system, inflammatory markers and microglia activation in the hippocampus and prefrontal cortex.

These data provide preclinical evidence in support of the ability of CBDV to ameliorate behavioral abnormalities resembling core and associated symptoms of ASD. At the neurochemical level, symptomatic CBDV restores hippocampal endocannabinoid signaling and neuroinflammation induced by prenatal VPA exposure.”

“Rett syndrome (RTT) is an X-linked neurodevelopmental disorder caused mainly by mutations in the MECP2 gene, being one of the leading causes of mental disability in females.

Epilepsy is one of the most common symptoms in RTT, occurring in 60 to 80% of RTT cases, being associated with worsening of other symptoms. At this point, no cure for RTT is available and there is a pressing need for the discovery of new drug candidates to treat its severe symptoms.

New and exciting evidence has been gathered and the etiopathogenesis of this complex, severe and untreatable disease is slowly being unfolded. Advances in gene editing techniques have prompted cure-oriented research in RTT. Nonetheless, at this point, finding a cure is a distant reality, highlighting the importance of further investigating the basic pathological mechanisms of this disease.”

“Very recently, a new study using CBDV has confirmed the potential of this particular phytocannabinoid in RTT.  The promising antiseizure effects of CBD, even in cases of refractory-epilepsy, observed in both clinical trials with humans and in laboratory animals, the effects of combinations of CBD and Δ9-THC in controlling muscle spasticity and motor symptoms, and the positive results of CBDV administration in two different mouse models of RTT, place cannabinoids as a viable therapeutic strategy in RTT. Moreover, CBD positively modifies impairments in motor, cognitive and social processes in animal models, further highlighting the potential of cannabinoid molecules to tackle RTT-symptomology.”

“A significant proportion of neonatal and childhood seizures are poorly controlled by existing anti-seizure drugs (ASDs), likely due to prominent differences in ionic homeostasis and network connectivity between the immature and mature brain. In addition to the poor efficacy of current ASDs, many induce apoptosis, impair synaptic development, and produce behavioral deficits when given during early postnatal development.

There is growing interest in new targets, such as cannabidiol (CBD) and its propyl analog cannabidivarin (CBDV) for early life indications. While CBD was recently approved for treatment of refractory childhood epilepsies, little is known about the efficacy or safety of CBDV.

Here, we addressed this gap through a systematic evaluation of CBDV against multiple seizure models in postnatal day (P) 10 and 20 animals. We also evaluated the impact of CBDV on acute neurotoxicity in immature rats.

Together, the efficacy and safety profile of CBDV suggest it may have therapeutic value for early life seizures.”