“Preclinical and clinical studies using cannabis-based therapy have been shown to provide both analgesia and anti-inflammatory effects, with an overall alleviation of clinical symptoms in animal models of arthritis, highlighting its promising therapeutic application for humans. Despite this, the development of cannabis-based therapeutics remains in its infancy, with further investigation into its efficacy and safety profile in patients still required. This synopsis reviews the various components of the endocannabinoid system in health and disease and their potential as therapeutic targets.”

“From last decade, there has been progressive improvement in computational drug designing. Several diseases are being cured from different plant extracts and products.

Rheumatoid arthritis (RA) is the most shared disease among auto-inflammatory diseases. Tumor necrosis factor (TNF)-α is associated with RA pathway and has adverse effects.

13 anti-inflammatory compounds were characterized and filtered out from medicinal plant species and analyzed for RA by targeting TNF-α through in silicoanalyses. By using ligand based pharmacophore generation approach and virtual screening against natural products libraries we retrieved twenty unique molecules that displayed utmost binding affinity, least binding energies and effective drug properties. The docking analyses revealed that Ala-22, Glu-23, Ser-65, Gln-67, Tyr-141, Leu-142, Asp-143, Phe-144 and Ala-145 were critical interacting residues for receptor-ligand interactions.

It is proposed that the RA patients should use reported compounds for the prescription of RA by targeting TNF-α. This report is opening new dimensions for designing innovative therapeutic targets to cure RA.”

“Legalization of cannabis’ medicinal use is rapidly increasing worldwide, raising the need to evaluate medical implications of cannabis. Currently evidence supports cannabis and its active ingredients as an immune-modulating agents, affecting T-cells, B-cells, Monocytes and Microglia-cells, causing an overall reduction in pro-inflammatory cytokine expression and an increase in anti-inflammatory cytokines. Due to the supporting evidence of cannabinoids as an immune-modulating agent, research focusing on cannabinoids and autoimmunity has emerged. Several clinical trials in multiple sclerosis, inflammatory bowel disease and fibromyalgia suggest cannabis’ effectiveness as an immune-modulator. However, contradicting results and lack of large scale clinical trials obscure these results. Though lacking clinical research, in-vitro and in-vivo experiments in rheumatoid arthritis, diabetes type 1 and systemic sclerosis, demonstrate a correlation between disease activity and cannabinoids.” “Cannabinoids may hold potential for the management of rheumatic pain.

Arthritis, often self-reported, is commonly cited as the reason for the use of medicinal herbal cannabis (marijuana). We have examined the prevalence of marijuana use among 1000 consecutive rheumatology patients with a rheumatologist-confirmed diagnosis and compared in an exploratory manner the clinical characteristics of medicinal users and nonusers.

Current marijuana use, medicinal or recreational, was reported by 38 patients (3.8%; 95% CI: 2.8-5.2). Ever use of marijuana for medical purposes was reported by 4.3% (95% CI: 3.2-5.7), with 28 (2.8%; 95% CI: 1.9-4.0) reporting current medicinal use. Current medicinal users had a spectrum of rheumatic conditions, with over half diagnosed with osteoarthritis. Medicinal users were younger, more likely unemployed or disabled, and reported poorer global health. Pain report and opioid use was greater for users, but they had similar physician global assessment of disease status compared with nonusers.

Medicinal users were more likely previous recreational users, with approximately 40% reporting concurrent recreational use. Therefore, less than 3% of rheumatology patients reported current use of medicinal marijuana. This low rate of use in patients with a rheumatologist-confirmed diagnosis is in stark contrast to the high rates of severe arthritis frequently reported by medicinal marijuana users, especially in Canada. Familiarity with marijuana as a recreational product may explain use for some as disease status was similar for both groups.” 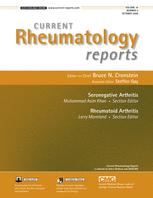 “The endocannabinoid system impacts pain and inflammation with potential for therapeutic effect on patients with rheumatic diseases. The current treatment options include the herbal product derived from the plant Cannabis sativa, as well as pharmaceutical preparations. The legalization of medicinal cannabis (marijuana) in many jurisdictions and widespread public advocacy has propelled an interest in use either by prescription or self-medication. In this review, we examine current evidence for efficacy and adverse effects of any cannabinoid product in rheumatic conditions. The evidence to date is scant and precludes making recommendations for the use of cannabinoid preparations in rheumatology patients. In particular, the risks of herbal cannabis in patients are not well defined. Anecdote and advocacy cannot supersede sound evidence.”

“Interleukin-1β (IL-1β) is involved in the up-regulation of matrix metalloproteinases (MMPs) leading to cartilage degradation.

Cannabinoids are anti-inflammatory and reduce joint damage in animal models of arthritis.

Cannabinoid WIN-55 can reduce both basal and IL-1β stimulated gene and protein expression of MMP-3 and -13. However WIN-55 also decreased basal levels of TIMP-1 and -2 mRNA.

These actions of WIN-55 suggest a mechanism by which cannabinoids may act to prevent cartilage breakdown in arthritis.”

Chondrocytes from OA joints were shown to express a wide range of cannabinoid receptors even in degenerate tissues, demonstrating that these cells could respond to cannabinoids.

Cannabinoids designed to bind to receptors inhibiting the catabolic and pain pathways within the arthritic joint, while avoiding psychoactive effects, could provide potential arthritis therapies.

Cannabinoids were originally derived from the cannabis plant, Cannabis sativa, which has been used medicinally and recreationally for many years because of its anti-inflammatory, analgesic, and psychoactive properties.”

“Marijuana, the common name for Cannabis sativa, is a widely distributed hemp plant whose dried flowering tops and leaves have been used for medicinal purposes for 12,000 years by some estimates.

The article by Malfaitet al. in this issue of PNAS is relevant to the question of whether such traditional uses of marijuana could be clinically justifiable today.

It is conceivable that marijuana contains a series of cannabinoids that, in the aggregate, could alleviate arthritis as implied in the present report, yet remain well tolerated.

Remarkably, the claim that marijuana does so also was made 4,000 years ago by the Chinese emperor Shen-nung whose pharmacobotanical compendium, the Pen-ts’ao Ching, concluded that cannabis “undoes rheumatism””

“The hypothesis was tested that THC and anandamide elicit antinociception in the paw pressure test, and that arthritic rats would exhibit a different response.

THC and anandamide appear to release an as yet unknown endogenous opioid, because naloxone significantly blocked their effects.

This study indicates that anandamide and THC may act at different receptor sites to modulate endogenous opioid levels in mechanical nociception.”

“Cannabinoids have been reported to have anti-inflammatory effects and reduce joint damage in animal models of arthritis.

This suggests a potential therapeutic role in arthritis of this group of compounds.

Cannabinoids were studied to determine whether they have direct effects on chondrocyte metabolism resulting in cartilage protection.

Win-2 significantly inhibited (P < 0.05) NO production in chondrocytes at 1-10 microM concentrations. The combined CB(1) and CB(2) cannabinoid receptor antagonists, AM281 and AM630, respectively, at 100 microM did not block this effect, but instead they potentiated it. Anandamide and Win-2 (5-50 microM) also inhibited the release of sulphated glycosaminoglycans in bovine cartilage explants.

The results suggest that some cannabinoids may prevent cartilage resorption, in part, by inhibiting cytokine-induced NO production by chondrocytes and also by inhibiting proteoglycan degradation.”